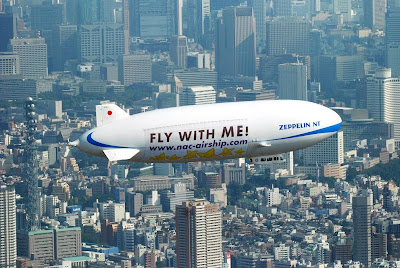 Nippon Airship Corporation (NAC) is offering air cruises over Tokyo and neighbouring cities in its Zeppelin NT airship between November 21, 2009 and January 4, 2010, to commemorate the 80th anniversary of the famous LZ127 Graf Zeppelin's world voyage via Tokyo.

NAC has created a line-up of cruises above the eastern Japan cities of Tokyo, Yokohama, Kamakura and Saitama, in its Zeppelin NT (new technology) which is one of only three operational Zeppelin airships in the world.

The Tokyo Cruise gives passengers the opportunity to view the city's iconic landmarks including Roppongi Hills, Ginza, National Diet Building, Asakusa and Tsukiji Fish Market from an altitude of about 500 metres.

Special flights including Christmas night cruises (December 18-25), and a New Year's Day morning cruise, are also available in Tokyo.
The Yokohama Cruise journeys through the sky above the city of Yokohama which this year is celebrating its 150th anniversary as a port city. Cruise highlights include views of the Yokohama Bay Bridge and Landmark Tower.

The longest cruise, Kamakura Cruise, flies above the historical seaside town of Kamakura, south of Tokyo, which was Japan's capital for more than a century from 1192.

For those wanting a just small taste of the airship experience, the Saitama Cruise which takes in the countryside and modern cities of Tokyo's neighbouring prefecture, is recommended.

Cruises are scheduled on selected days and nights (night cruises in Tokyo and Yokohama only), during the abovementioned November – January period.

Cruise prices based on exchange rate of 83.28 yen at November 9.

All cruises depart from and return to Honda Airport in Okegawa City, Saitama Prefecture.