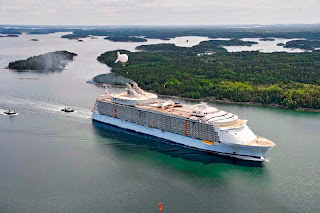 IN his continuing search for the more weird, whacky and wondrous in the world of travel, David Ellis says the world's newest and largest cruise ship will give trivia buffs plenty to play with – and port authorities equally plenty to ponder over as they work out how to get more than 5000 passengers off and back on again in one day in ports of call.

The 225,000 tonne Oasis of the Seas cost US$1.5 billion and a further US$75m was spent on revamping a pier at Fort Lauderdale in Florida for her exclusive use.

She is nearly five times larger than the Titanic, 360m long (longer than three-and-a-half football fields,) 47m wide (greater than the distance between a Boeing 747's wing tips,) while her 20-storeys rise 72m above the waterline.

And so she can get under bridges that would normally bar her way, her funnels retract telescopically into her interior.

Oasis will normally carry 5400 passengers, but can carry as many as 6360, so if you don't want to run into someone for a second time, it will be easy enough to avoid them. She has 21 swimming pools and Jacuzzis and two artificial sand beaches complete with surfing simulators, an ice rink, two rock-climbing walls, basketball and volleyball courts, a real-grass chip and putt golf course and gardens with 97 varieties of living trees, shrubs and flowering plants.

There's a boardwalk surrounded by restaurants and a 'fun park' with full-size carousel, and the whole ship is divided into seven "neighbourhoods," much like theme parks with various specific attractions in each. These include a mini, mini New York Central Park overlooked by dozens of the ship's cabins and staterooms, with zippy flying fox running over its full length.

Six diesel engines generate 13,000 horsepower to drive the electric motors and provide power throughout the vessel – that's distributed via 5280-kilometres of electrical cabling and 100,000 power points.

Ice-making machines can produce 50-tonnes of ice every 24hrs for the 37 bars and 20 cafes and restaurants… which will use 60,000 serviettes a day.

Passengers and crew will use 2,350,000 litres of water a day that will be stored in 31 vast inboard reservoirs, and a sweet shop will stock 72 different types of confectionery.

And the casino has no fewer than 450 poker machines, and 600,000 litres of paint went into decorating the ship.

And a final note for trivia buffs – huge as she is, Oasis of the Seas has no rudders: she is powered by three stern-mounted azimuth thrusters that each contain an electric motor driving a 6m propeller, and which can be rotated during docking, a process assisted by four 7380hp bow-thrusters.

Oasis of the Seas was launched last month in Finland and will sail her maiden passenger voyage from Fort Lauderdale to Haiti this week; she'll begin regular Caribbean cruises from mid-December.