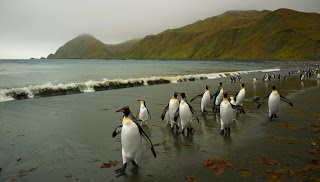 The Australian and New Zealand Sub-Antarctic Islands, regarded by UNESCO as one of the worlds' precious regions of unique biodiversity, will be visited by the luxury expedition cruise ship Orion in December 2009 and again in 2010.

Recognised for their volcanic and glacial geological formations and extraordinary diversity of flora and fauna this area has the highest diversity and abundance of seabirds found anywhere in the world. Over half of the world's seabirds, some of which exist nowhere else, call this region home.

Joining Orion's specialist Expedition Team to assist guests maximise their understanding of the important biodiversity of this region will be a number of guest lecturers including British zoologist and naturalist Dr John Sparks; threatened species ecologist with Birds Australia, Glenn Emke, and Neville Peat, who wrote the 1998 World Heritage Area nomination for the New Zealand Sub Antarctic islands.

These expeditions, with departures in December 2009 and 2010, particularly suit nature lovers and keen wildlife photographers as well as those with a spirit of adventure interested to visit places of outstanding importance yet rarely seen.