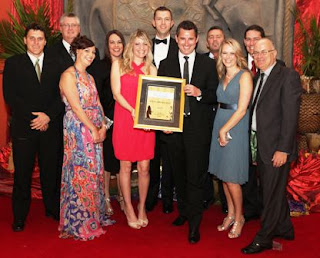 Novotel Cairns Oasis Resort has been named as North Queensland's most deluxe accommodation.

The award, announced at the Tropical North Queensland Tourism Awards, recognizes excellence in the hospitality industry.

More than 500 operators vied for honours in various categories at the event which were established 11 years ago.

Tourism Tropical North Queensland CEO Rob Giason described Cairns as one of the giants of Australia's tourism industry. 'Winning an award here is a huge achievement by any standard,' he said.

'With the prediction that the worst of the global financial crisis is over and that the recovery is beginning, the 2009 TNQ Tourism Awards were an evening of optimism in Cairns,' Mr Giason said.

Novotel Cairns Oasis Resort general manager, Greg Erwin said the award acknowledged the unstinting enthusiasm and energy of his staff in what had been a difficult year.

'We recently emerged from a major refurbishment which totally changed the look and feel of the property, and I can't thank my staff enough for their enormous dedication and hard work during this time', he said.