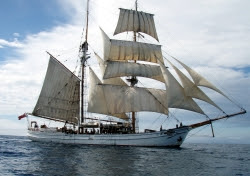 After extensive repairs and refitting, according to the owners the Tall Ship Soren Larsen is due to sail from the repair yard at Whangarei in New Zealand to Auckland on 17th November and will be fully operational from the 28th November 2009.

From 22nd December until 27th February the ship has a full schedule of 4 & 5-night voyages between the breathtaking Hauraki Gulf near Auckland & the spectacular Bay of Islands.

Then the better news……

To encourage you to make your plans to join one of these cruises Outdoor Travel are offering discounts of approximately AU$200 - 250 per person on the 5-night voyages travelling in December 2009 or in January & February 2010.  All inclusive cruises will start from AU$990 for 4-nights or $1190 for 5-nights (not including airfares)