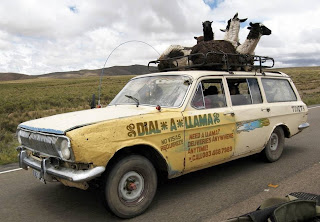 IN his continuing search for the more weird, whacky and wondrous in the world of travel, David Ellis says it's easy to see why journalists seeking a quick scoop should take a moment to check the facts.

When a recent radio news report in Johannesburg said the Dalai Lama was reportedly seen in rural South Africa and speculated he was on a secret mission to was to seek South African government support, a suspicious local newspaper went to the town in which the holy man was supposedly staying during his "negotiations."

As our photo shows, the radio station should have taken the same investigative response as the newspaper before going to air…
Posted by rodeime