STRUTH - All Bets are Off in Catalina's Casino 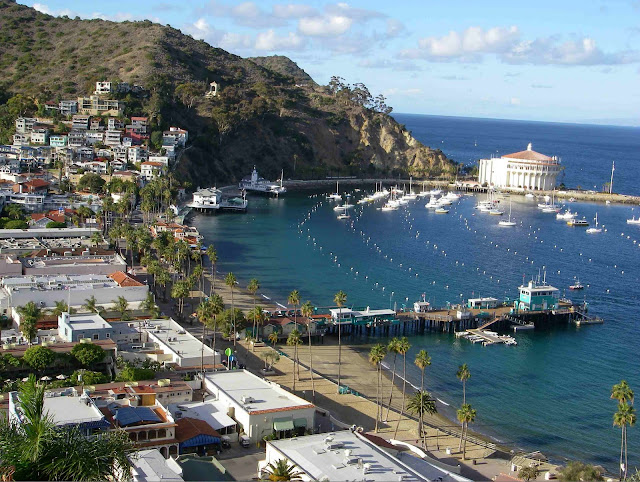 IN his continuing search for the more weird, whacky and wondrous in the world of travel, DAVID ELLIS says that despite what The Four Preps assured us, Catalina Island is not twenty-six miles across the sea, but in fact 22-miles miles (which means its not forty kilometres in a leaky old boat, but thirty-five kilometres.)

And it's full of life's little mysteries. The main town, Avalon has a Third Street but no First or Second Streets, the Post Office doesn't deliver the mail (but if you ask the home-delivery grocer he'll pick it up for you,) and the local cabs deliver for Avalon's pizzerias.

It's also got an official Bird Park that was once one of the biggest in America, but today its aviaries are empty and people go there to walk and cycle

There's a multi-million dollar 'wedding cake' art deco Casino that despite its name has never been used for gambling but only for dances, dining, movies and concerts, and the 4000 locals are outnumbered 250-1 by 1,000,000 visitors a year.

Local legislation limits the number of cars and trucks on the island, and to get around this the locals drive golf buggies – of which there are more on the roads than all other kinds of motor vehicles combined.

And no one knows why Catalina Island's Constitution is the only one in America that was written in pencil rather than in ink.

Actress Natalie Wood drowned off the island in 1981, actor Phil Hartman was murdered there by his wife in 1988, Winston Churchill once caught a marlin off the island, and a local 1930s disc jockey went on to become one of America's most successful actors with 53 movies to his credit – and after that, President of the United States.

His name was Ronald Reagan.