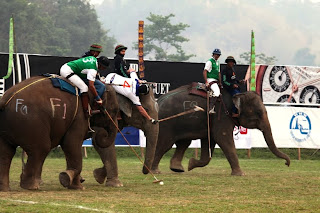 Audemars Pigeut Triumphs over King Power to Win the Ninth

This year's annual King's Cup Elephant Polo tournament held in the idyllic surroundings of the Anantara Golden Triangle Resort provided spectators with nail biting matches, a beautiful setting and a great cause to rally around.

From March 22nd to March 28th, twelve elite teams from all around the world descended upon Chiang Rai in the North of Thailand and battled it out for the championship of this unique and increasingly-competitive sport. The real winners, however, were the elephants themselves – over US$300,000 has been raised since the tournament started in 2001 to help provide protection and support for the embattled Thai elephant.

Expanding in popularity, The King's Cup Elephant Polo has gone from a small two day event with six teams into a week long extravaganza with the 2010 tournament featuring twelve teams from four continents, encompassing forty players from a least fifteen different countries.

As anticipated by the experts, the finale pitted King Power against the Audemars Piguet team. A close game until the second half, where Audemars Pigeut's superior polo-skills and greater reach eventually won out with the team coming from behind to take the overall tournament.

King Power look set for a win early in the game by firmly planting the first goal of the game in the first thirty seconds but it was the unbeatable performance and teamwork of team captain Peter Prentice and brothers Uday and Angad Kalaan that took the Audemars Piguet team to a resounding four point win over Kings Power; the final score being 10 to 6.

To top everything off, a gala dinner held during the tournament garnered 1.8 million Baht for the Thai Elephant Conservation Centre and the National Elephant Institute, the official beneficiaries of the annual event.

The on-site Elephant Camp at Anantara Golden Triangle Resort & Spa's 160 acre lush jungle setting plays host to the annual King's Cup Elephant Polo Tournament.  The game, which showcases the skillful grace of its rescued elephants, has become Thailand's 6th largest annual tourist event according to the Tourism Authority of Thailand.  The 2010 event, to be held on 22nd March, promises to enthrall spectators for the 9th year running, thanks to all our valued sponsors.
Posted by rodeime