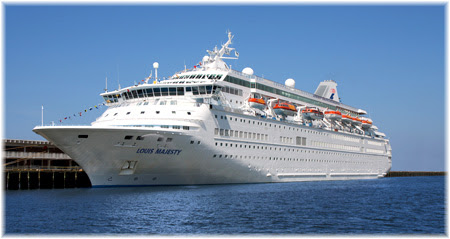 Cyprus-based Louis Cruise Lines says the incident occurred aboard the 1,790-passenger Louis Majesty as it was sailing from Barcelona to Genoa, Italy. The line says the "abnormal" waves smashed windows as high as deck five on the vessel.

"The windows in a public area on deck 5 on the forward part of the vessel smashed resulting (in) the fatal injury of two passengers of German and Italian nationality while 14 more passengers suffered light injuries," the line says in a statement.

The horrific tragedy unfolded on the Cypriot-owned Louis Majesty near the French port of Marseilles after the walls of water appeared from nowhere.

‘There were at least three abnormally high waves which broke windshields and cascaded along the decks,’ said a local coastguard spokesman.

There were around 1350 people on the ship, including crew. The casualties were very serious, with a German and an Italian passenger dying. At least six other people suffered injuries.’

The Marseilles coastguard spokesman said the waves were approaching 30ft high and may have been part of an isolated tsunami.