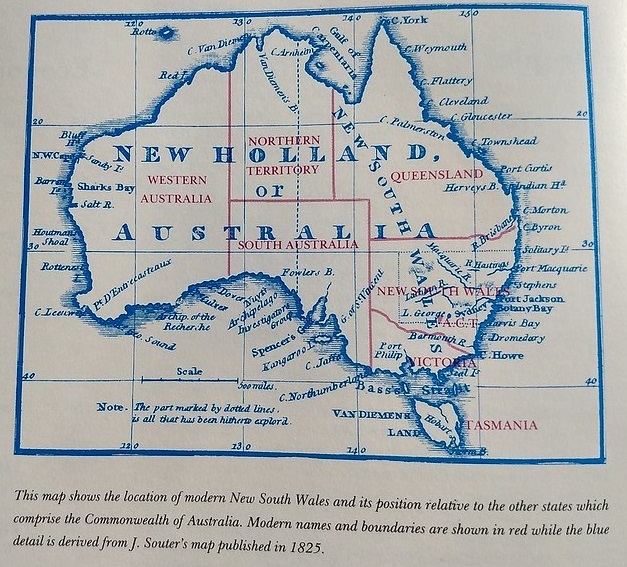 The continent was first named 'Austrialia del Espiritu Santo' by Quiros in 1606, renamed 'New Holland' by Tasman in 1644 and finally Cook, in 1770, initially called the eastern half 'New Wales' and later New South Wales. Although the name 'New Holland' was used in British documents up to 1849, Macquarie officially adopted the name 'Australia' in 1817 as it was already commonly used.


The name 'New South Wales' remained in official use to describe that part of New Holland which Cook had claimed in the name of King George III. Originally N.S.W. consisted of over half the continent, Tasmania and New Zealand. The boundaries were continually adjusted until the shape recognised today emerged in 1859. The Australian Capital Territory was ceded to the Commonwealth Government in 1911, as was part of Jervis Bay in 1915

NSW contains examples of the many landscapes which exist in Australia: Ranging from the near-tropical beaches of the North Coast to the alpine wilderness of the Snowy Mountains in the south, including Australia highest peak Mount Kosciuszko (2228 metres) and from the bush landscapes of the coastal zone and rugged uplands of the tablelands to the harsh and arid plains of the far west About 80% of the State lies west of the Great Dividing Range (also known as the eastern uplands or eastern highlands) including half of the Great Artesian Basin and most of the two longest rivers in Australia the Murray(2 590 kilometres) and the Darling (2 740 kilometres).


The climate of NSW is generally mild and free of extremes of heat and cold, except in the far west where the temperature at Bourke has exceeded 52°C and in the south-east at the Snowy (Charlottes Pass) where the temperature has fallen to -22°C, the lowest recorded in Australia. The coastal areas are humid, the tablelands are cool the north and cold in the south, the western slopes are drier but warmer and the western plains, covering over 60% of the State are very dry and hot. The generally dry conditions often broken by intermittent widespread flooding, tend to encourage bushfires especially in woodlands near urban centres or in the open grassland of the west

Although NSW covers 10% of the Australian mainland, the State has 20% of the cropland, 20% of the mineral production, 50% of livestock 55% of the population and 10% of the manufacturing output Sydney is Australia's leading financial and commercial centre while Newcastle and Wollongong are the premier steel and heavy engineering centres

NSW, home of the first permanent European settlement in Australia, celebrates bicentenary with Australia in 1988.