History in the Hunter: The historic Arnotts bakehouse, Morpeth 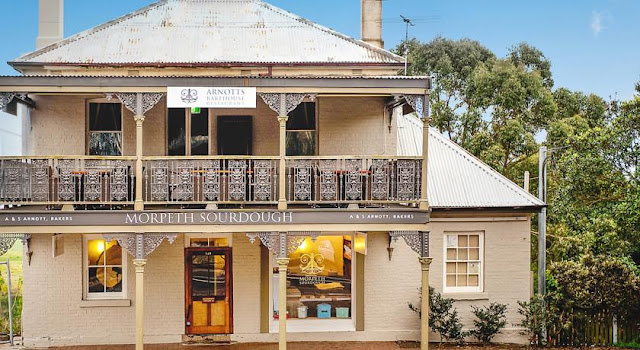 This historic Bakehouse was built by Richard Chapman (1827-1887) In about 1851, Chapman was a property owner, butcher and businessman of Morpeth whose residency extended from at least 1850 to his death in 1887. His butchery business and residence was next door to this site but has since been demolished.


The building has technical value as a rare, authentic, trade industrial building providing evidence of our backhouse design and technology. The large oven is a Scotch oven in design and has been cited by the NSW Heritage Office as the oldest of its kind still standing in the Southern hemisphere.

It also provides intact evidence of an early colonial workplace and represents an aspect of trade and occupation in a regional area that had direct links with Sydney and with navigation. Out this window is the Hunter River, whose importance as a colonial port is well established, with approximately 1300 steamships arriving at this port annually, in its heyday.

Bakery products made in this bakehouse would have been consumed locally as well as being shipped to other parts of NSW and beyond, eg: ship's biscuits

During the 1860s the bakehouse was operated by the Arnott brothers, David and William. William Arnott founded Amotts Biscuits, and this bakehouse is the only known industrial building associated with the establishment of the Arnott's baking business in from the 1800s. The Arnott family made a great contribution to Australia's development and provided an example of hard work and entrepreneurial business activity for others to follow. The owners are directly related to William Arnott and his brother David, who operated here.

In the 1880s, the bakehouse was used by James Travers, presumably, on lease from the then owner William Keating a saddler of Morpeth Travers wholesale bread business serviced at least Morpeth if not further afield. During the restoration, we uncovered an invoice belonging to Travers from 1884 and lists bread ordered by the local hotelier, Mr Gleeson for a Monday, Wednesday and Friday delivery. Also, note a loaf of bread weighed two pounds (2lb) and cost one pound two shillings and 6 pence.

The location of the Bakehouse was advantageous in terms of sourcing raw materials for construction, there was plentiful supply locally. Along the Hunter River were vast quantities of building timber growing naturally, the Morpeth sandstone was considered world-class quality and bricks were manufactured from local clay.

In the mid-1800s, lime mortar was difficult to source in Sydney, this was not the case in Morpeth. At Coal River (Newcastle) the lime was made from oyster shells which, according to WC Wentworth, were found close to the banks of the river in beds of amazing ze and depth, which some surmised were the results of the perennial feasts of the Aborigines.

1816 Captain Wallis established the Limeburners Bay settlement north of Stockton on the Hunter River, where convicts were employed to bum lime. The manufacture and trade of shell lime was continued by private settlers into the late 1800s. Consequently, Shells can be easily seen in the mortar of older buildings in coastal and riverine New South Wales and as such here in Morpeth. At Newcastle, according to WC Wentworth, the process of making time from oyster shells was simple and quick: They are first dug and dried, then piled over large neaps of wood, which are set fire to, and speedily convert the superincumbent mass into excellent lime.

The other components of mortar sand and water, were also plentiful here and the mortar recipe used during restoration of the Bakehouse mimicked the old mortar of rose river sand, lime and water. The availability of mortar in this brick construction gave strength and longevity assisting to survival into the twenty-first century.

Looking up to the timber roof, on one whole section of the Bakehouse, you can see the timber shakes lining the root. A shake is a basic wooden shingle made from split food

rather than shingles which are sawn logs and are generally thicker. Strong shadow lines and rich thatch-like textures typify the look resulting from timber shakes They are nailed to the roofing timbers and weatherproof the building Nails were always precious in Colonial days because they were made by hand even a good forge hand could make only 1400 a day.

At some point, many of the shakes were removed from the Bakehouse roof and replaced with corrugated iron. By 1850 as iron came into general use, the craft of shingle-splitting began to fade away. During the restoration, the remaining shakes were preserved and new iron sheeting instaled.

At some time after 1850. the Bakehouse wes connected to the main building. This room then formed part of the working space, presumably to be used as a preparation room for when the Bakehouse was operation center as the kitchen lor the main residence

The fuel stove featured here was a modem appliance for its time. It was designed and fabricated in Morpeth by Duncan Sim (1818-1892) who had a substantial foundry here in Swan Street (see his makers mark at front of the stove). The Sim Foundry iron and brass, operated in Morpeth from 1850 to 1926 and produced much of the cast iron used in the buildings of Morpeth.