Inside World's Largest Cruise Ship - Oasis of the Seas 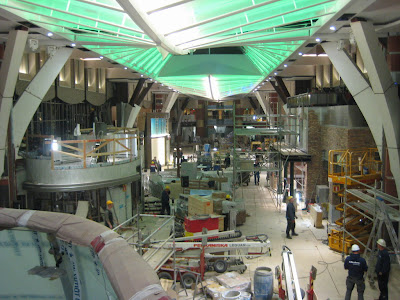 Adam Armstrong, Commercial Manager, Royal Caribbean Australia knew to see Oasis of the Seas first hand would be awe-inspiring, but she has exceeded even his highest expectations. Adam was among the lucky contingent who travelled to the shipyard in Turku, Finland last week when Royal Caribbean opened its doors for a behind the scenes peak at the construction process.

“I am in awe of the creativity and innovation that has bought Oasis of the Seas to life,” says Adam.

During the visit, executives from STX Europe (Oasis of the Seas’ shipbuilders) and Royal Caribbean Cruises Limited explained the transition from an early concept back in 2003 through to signing a contract with the shipyard in 2006, laying the keel in 2007, and finally floating the ship out in late 2008.

The visitors were taken on an extensive onboard tour through the various neighbourhoods on Oasis of the Seas, with most of the areas now open for viewing. First stop was the Royal Promenade, the hub of the ship with a 19-metre wide walkway of shops, bars and cafes – an area twice as wide as on Royal Caribbean’s Freedom or Voyager Class ships. It’s so huge that guests will find it hard to believe that they are actually on a cruise ship. At the Royal Promenade, guests of this special tour took a ride on the Rising Tide Bar, an innovative feature of Oasis of the Seas. This circular bar takes 30 guests at a time up and down the three decks between the Royal Promenade and Central Park, moving at a very respectable speed of 50 millimetres per second.

Adam and his tour group were the first in the world to see the comfortable lodgings that guests onboard Oasis of the Seas can look forward to. The highly anticipated loft suites were on display at their dedicated factories where they are constructed as mono-blocks before they are transported to the ship after completion.

After a whopping 1.7 million construction hours and half a million design hours, the ship is now around ninety-five per cent complete. Another 450,000 man hours remains to complete the internal fixtures and furnishings in preparation for her handover to Royal Caribbean on 28, October, 2009.

What surprised Adam most about this experience is how “unfinished” the ship looks. Oasis of the Seas is just two months from delivery, yet it appears there is still much work to be done. But it’s not actually until the very last few weeks that the interior starts to resemble what we see as passengers on the finished vessel because furniture and soft furnishings are the last things to be completed. Some of the public rooms are nearly finished, including the ice-skating rink “Studio B”, but almost as soon as they are completed they are covered up again, protecting walls, seats and carpets with plastic to prevent damage from the ongoing construction work throughout the ship.

Here are some other interesting facts Adam picked up along the way:

o The ship is made of 181 major ‘blocks’ brought together with 2,500 kilometres of welding;
o The hull weight of 45,000 tonnes is equivalent to around 100,000 mid-sized cars;
o The ship will have 24 dining venues – that’s more than three per day on a 7-day cruise and 37 bars;
o Over 12,000 live plants will be located around the ship, particularly in Central Park;
o A number of new stores were announced including ‘Cupcake Cupboard’ (where guests can decorate their own cupcakes) and American lolly shop ‘Candy Beach’;
o The ship is an astonishing 47 metres wide; and
o Oasis of the Seas will be 30% more energy efficient than the average cruise ship.