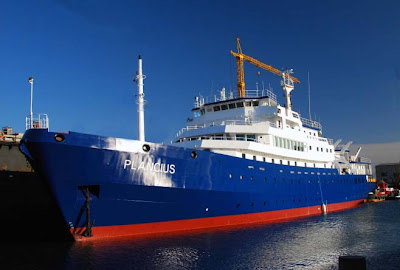 Palmer Station is located at 64°46' S, 64°03' W, on a protected harbor on the southwestern coast of Anvers Island off the Antarctica Peninsula. Palmer is the only U.S. Antarctic station north of the Antarctic Circle. The temperature is mild, with monthly averages ranging from minus 10°C in July and August to 2°C in January and February. The annual mean is minus 3°C. The extreme range is minus 31°C to 9°C.

The station, built on solid rock, consists of two major buildings and three small ones, plus two large fuel tanks, a helicopter pad, and a dock. Construction was completed in 1968, replacing a prefabricated wood structure ("Old Palmer," established in 1965) two kilometers away across Arthur Harbor. Old Palmer has been disassembled and removed from Antarctica. Somewhat over 40 people can occupy Palmer in the summer. Wintering population is about 10, although Palmer does not have a long period of winter isolation as do McMurdo and South Pole.

Palmer Station is superbly located for biological studies of birds, seals, and other components of the marine ecosystem. It has a large and extensively equipped laboratory and sea water aquaria. In 1990 it was designated by the National Science Foundation as a long term ecological research (LTER) site. Ocean and climate systems, aeronomy and astrophysics, glaciology also have been pursued at and around Palmer. The station operates in conjunction , with a research ship, the R/V Laurence M.Gould.

Palmer Station is named for Nathaniel B. Palmer, a Connecticut sealer who, on 17 November 1820, during an exploratory voyage ranging southward from the South Shetland Islands, may have been the first person to see Antarctica. (British and Russian ships were in the area at about the same time.)

Our programme during the visit on 09 March 2010:
A small group from the station will come out to the ship to give a brief overview of the US Antarctic Program to our passengers. Following the presentation, we can begin sending passengers ashore.

The Palmer Station area has two sites typically visited by tour groups: Palmer Station itself and Torgersen Island. 40 people at each of these sites are allowed to visit at one time. There are numerous scientific study sites in the area, and we ask passengers to avoid these due to the risks to the wildlife under study.

When our passengers visit the station, they will be divided into groups of 10-12 people to be given a tour. A tour guide from Palmer Station will walk them through the route, which includes a look around the outside of the station, a view of some local sea creatures in an outdoor aquarium, and an opportunity to purchase souvenirs. After the tour, passengers are invited to come to the dining room where they can meet some of our staff, enjoy refreshments, pick up literature, and sign our guest book. Each group will spend approximately 60 to 90 minutes on station.

Passengers' passports can be stamped with the dated Palmer Station stamp. Palmer Station does not have a post office, therefore no stamps or postal services.

Passengers are encouraged to bring a bag with them to hold literature and souvenirs, since this helps reduce the number of plastic bags used. For the shop, only U.S. cash and Visa or Master Card credit cards are accepted.

Email ThisBlogThis!Share to TwitterShare to FacebookShare to Pinterest
Labels: Oceanwide