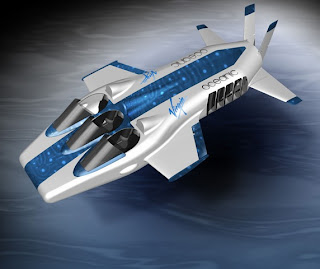 Very soon the term ‘adventure travel’ will have a whole new meaning.

Once the coveted tag of the '70s 'overland through Asia' set, then the trekking in Himalaya crowd, Antarcticans and expedition cruisers, now the playboy of extremes, Sir Richard Branson, introduces his deep sea submarine 'cruise'.

Not content with sub-orbital space flight, Branson has revealed his next daring plan to thrill well-healed adventurers like himself, the Necker Nymph.

The name 'Necker' is derived from Branson's private Carribean Island and is becoming a trademark for Virgin Limited Edition, his uber elite collection of outrageously expensive things to do and places to stay.

Looking something like a Star Wars Speeder or a Jetson's runabout, the positively buoyant Nymph travels through the water like an aquatic aircraft. The pilot uses a joystick to steer the Nymph and the control surfaces are similar in look and operation to an aeroplane wing. Normal submarine use ballast to sink, the Nymph "flies".

Designed and built by renowned marine engineer, Graham Hawkes, of Hawkes Ocean Technologies, he calls it by its real name: DeepFlight Merlin.

But the three-seater Merlin, with open cockpit, is constrained to normal scuba limits (about 40m) and is merely a plaything compared to Branson's plan to introduce a pressurized version for ultra deep sea work.

Hawkes constructed a super deep-sea version for the late Steve Fosset, called the Deep Flight Challenger, and it is this design that Branson is eyeing for his next commercial venture. Fosset intended to break the solo dive record using this craft by descending to the unfathomable depth of 37,000 feet (11.3 kilometres) but he disappeared before he could attempt the feat.

The Challenger has been sitting idle under lock and key in Hawke's facility for over twelve months and Branson has had his eye on it all the while.

"The oceans are in their own way as beautiful as space, and this is something Virgin is seriously looking at," Branson said at the time.

According to Hawkes, the breakthrough with this design is the ability of the craft to function independently of an expensive mother ship, thus allowing the cost of the craft and its supporting technology to be slashed by up to 90 per cent compared to submersibles currently in operation.

"A pressurised submarine is nearly completed. But the real challenge is to explore what's going on at the bottom of the oceans," Branson is quoted in UK's The Sun.

I have my entry in for the new product name: "Virgin Atlantis"