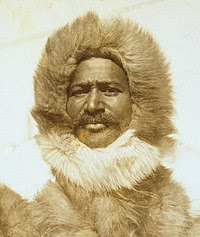 As we honor the legacy of Dr. Martin Luther King, icy cold Arctic blasts will drop temperatures across the nation this long weekend. More than weather reports connect African-Americans to the Arctic, although many may be unaware of the exploits of explorer Matthew Henson.

Maryland native, Matthew Henson was born in 1866 to freeborn African-American sharecroppers. Orphaned at 11, by 13, he was a cabin boy. The captain of the vessel schooled Henson in reading, writing, geography and history, as they sailed to Asia, North Africa and the Black Sea. Eventually Henson settled in Washington, DC, working as a clerk to a furrier.

Arctic explorer Robert E. Peary met Henson at his place of employment, when Peary sold some of the furs he brought from Greenland. Peary invited Henson to join his expedition to Central America. When the men returned two years later, Peary had come to rely on Henson's skills as a navigator and carpenter. For 22-years the pair charted remote coastlines and glaciers in Greenland and in the Canadian Arctic.

He and Peary set the farthest north record twice, as they attempted to be the first men to reach the North Pole. Then in 1906, Henson, with Peary and four Inuit, made a final attempt to reach 90N. Henson arrived before the others, thus becoming the first human being to stand at the top of the world, April 6, 1909. The triumph destroyed their friendship. Controversy clouded their success. Neither had collected sufficient data to support their individual claims irrevocably. Unfortunately, the bitterly contested title of first man to reach the North Pole overshadowed their unquestioned successes: In 1895, Henson with Peary charted the entire Greenland Ice Sheet, and discovered the island's most northerly point.

In recognition of his outstanding 22-year career as an Arctic explorer, Henson was posthumously awarded the National Geographic Society's Hubbard Medal in 2000.

Reaching the North Pole in 2010

Quark Expeditions operates a nuclear-powered icebreaker from Murmansk, Russia to the North Pole. There is one departure in 2010, July 9 to 23. The vessel carries a maximum of 128 travelers in cabins with facilities, with outside views. The cost per person, in twin occupancy, is $22,690, plus airfare from Helsinki to Murmansk at $1,650 per person. Travelers can book online at www.quarkexpeditions.com/arctic/north-pole or they can call 1-888-892-0171.