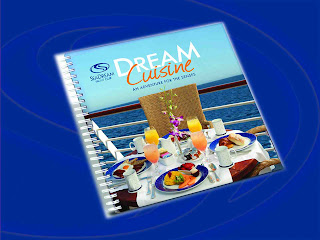 Five-star recipes that have earned SeaDream Yacht Club the world's
highest accolades for Cuisine Excellence are now available for those
with a passion for creating fine food at home.

The company has released a mouth-watering cookbook titled Dream
Cuisine, featuring more than 90 of its top recipes created by its
Executive Chef d'Cuisine, Robert van Rijsbergen and the corps of Chefs
d'Cuisine aboard its boutique 110-passenger SeaDream I and SeaDream
II.

Subtitled An Adventure for the Senses, recipes that are accompanied by
spectacular photography cover classic French dishes, sophisticated
international offerings, a mingling of Asian influences, and
vegetarian choices, with quantities for each sufficient to serve four
persons.

"There's something for all occasions," says SeaDream Yacht Club's
President and CEO, Larry Pimentel, "with recipes following how guests
enjoy dining aboard from Welcoming hors d'oeuvres, through luncheon,
dinner appetizers and main courses and desserts, a spa menu and our
inspirational Menu Degustation for anyone wanting to host a truly
memorable dining experience at home."

SeaDream's Dream Cuisine cookbook costs US$30 plus postage through the
Boutique section of its website www.seadream.com; recipes are amongst
those that have earned Cuisine Excellence accolades from Conde Nast
Traveler magazine and Travel + Leisure magazine, and the highest score
in the Food Category in the Berlitz Guide to Ocean Cruising and Cruise
Ships.

CREATIONS in Dream Cruise include:

. Cream of Pumpkin Soup with lobster and whipped cream