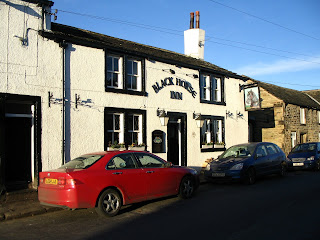 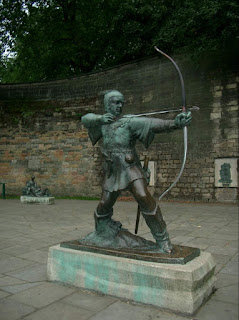 THERE would hardly be a person in the English-speaking world who has
not heard of Robin Hood.

With his band of Merry Men he thrived on robbing the rich to give to the poor.

Little John and Friar Tuck – names almost as familiar as Robin Hood
himself – and the love of his life, the beautiful Maid Marion… the
wicked Sheriff of Nottingham who would scour Sherwood Forest in search
of the brigand, all once lived in Nottingham.

Or did they and Robin Hood?

Every year thousands of tourists pour into the city of Nottingham and
nearby Sherwood Forest to feel the Robin Hood experience.

But the folk of the village of Clifton in West Yorkshire will tell you
these tourists have got it all wrong.

Over a pint of best bitter in the Black Horse Inn they'll quote the
history books to prove that if you're looking for the domain of Robin
Hood you should be pottering around Clifton, not Sherwood Forest
that's a few hundred kilometres away.

For starters they'll tell you, history says there never was a Sheriff
of Nottingham… in Robin Hood's day there was a Sheriff of Yorkshire.

And the drinkers at the Black Horse will explain that our hero's real
name was not Robin Hood, but Robert Hood of Wakefield, an old
industrial centre near Clifton.

As well, just down the road from the Black Horse is the site of
Kirklees Priory, in whose gatehouse Robert Hood spent his dying hours
back around 1346. Stories claim he was 'bled' by the prioress and left
for dead.

When Little John found him in his death throes, Robert – or Robin –
Hood made one last request: he had Little John prop him up so he could
fire an arrow through the window, and request that he be buried where
it landed.

But from the gatehouse in which he is supposed to have died, its 600m
to his grave – almost twice the range of a skilled longbow archer. And
Robin Hood was around a venerable 70 years at the time he died.

And much as they wish they could, tourists can't visit where Robin's
arrow allegedly landed – it's on private property. And even if they
could get there, they'd find a fake gravestone anyway.

The original monument disappeared some time around 1670. A replica was
made. But locals chipped pieces off it believing that by placing it
against their cheek, they would be cured of toothache. Another
replacement was made in the 19th century – replete with Olde English
wording in an attempt at 'authenticity'.

It's not a bad story. And the local real estate folk are not about to
reject it.

The Black Horse Inn in Clifton also has links with more recent
history. On the walls of its bar are autographed photographs of some
of the pop music legends of the 1950s and 1960s.

They seem quite incongruous in this tiny Yorkshire village.

But Mine Host Andrew Russell has a ready explanation. In nearby
Batley, a dour workers' village that in the 1960s had seen better
days, an entrepreneur named Jimmy Corrigan established, in a converted
sewage works, the Batley Variety Club.

Waving a fat cheque book he lured the biggest names in the world to
this musical oasis in the grim north of England.

Louis Armstrong's two-week gig in June 1968 put the club on the map.
And the likes of Roy Orbison, Johnny Mathis, the Everly Brothers and
Neil Sedaka cemented its fame.

But the stars had no desire to stay in Batley – and word soon got
around that the Black Horse Inn at Clifton provided a better retreat.

"They kept coming back time and time again," Russell explained. "And
they have continued to do so even though the Batley Variety Club
ceased its big shows three decades ago. The aging stars now come for
holidays."

George Hamilton IV, who had huge country hits with Why Don't They
Understand and Abilene, is a regular. Now aged 70, he has been coming
back every couple of years.

He's now arguably the village's most famous septuagenarian since Robin
Hood himself.

Robin Hood's statue is in Nottingham.... even though the people of
Clifton in West Yorkshire still claim him as their's.

The historic Black Horse Inn... a landmark of note from Robin Hood to
Roy Orbison, the Everly Brothers and George Hamilton IV, who still
visits for a pint today.