Going Green in the Galapagos 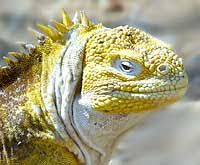 Ecoventura is the pacesetter in responsible tourism to the Galapagos Islands. Through its core commitment to the ongoing sustainability of this fragile and at-threat ecosystem, Ecoventura (www.ecoventura.com) is a case study for communities and regions seeking to discourage the negative effects of irresponsible tourism.

We invite our media friends to take a close look at this one small company that is “walking the talk” of sustainable tourism. Through an initiative of President and Owner Santiago Dunn, Ecoventura has spent upwards of $500,000 since 1999 to refurbish its fleet of touring vessels in order to meet its own stringent ecology-minded standards. It has pledged to collect through client donations and its own infusions $80,000 per year over the next three years for the Galapagos Marine Biodiversity Fund which targets environmental education and marine conservation by strengthening the local communities’ ability to manage natural resources. 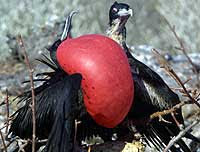 On one level this is self-serving; if the fragile ecosystems of the Galapagos Islands are irreversibly damaged by tourism and visits are drastically reduced or altogether banned, Ecoventura is out of business. On the highest level, this small company is doing its part to raise the consciousness of travelers and how collective footprints can either be a disaster or a positive effect.

The company began running yacht tours in the Galapagos in 1991 but it wasn’t until 1999 that Ecoventura began “greening” its operations and equipment. Since then it has pro-actively chosen to help preserve the ecological integrity of the Galapagos Islands for both scientific and economic benefits. To this end Ecoventura is:

• One of the first recipients (in 2000) of SmartVoyager, a voluntary environmental program developed by Corporacion y Desarollo from Ecuador and The Rainforest Alliance from New York. This program gives a “green seal of approval” to tour boats that comply with requirements to tread lightly on the area’s fragile ecosystem.

• The first (in 2006) Carbon Neutral operation in the Galapagos Islands when it chose to completely offset carbon emissions from the company’s four yachts, offices and operations (including business travel). Emissions are now being offset through a portfolio of projects administered by NativeEnergy.

• The first fleet in the Galapagos (2007) to install TRABOLD oil filter systems on all four yachts to reduce fuel consumption, oil lubricants (by 90 percent) and reduce gas emission.

• The first company in the region (2006) to implement a program whereby its guests can donate to a new fund administered by the World Wildlife Fund (www.wwf.org) in support of the Galapagos National Park. Ecoventura partnered with the WWF to create the Galapagos Marine Biodiversity Fund (GMBF) which targets environmental education and marine conservation by strengthening the local communities’ ability to manage natural resources. 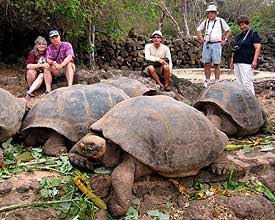 The marine reserve surrounding these two remote Islands supports some of the planet’s most unique biodiversity and is one of the world’s premier diving areas. However, it has also been identified as the most threatened due to continued presence of industrial fishing boats. To date, park statistics demonstrate the highest number of fishing violations have occurred in this area. Hammerhead and other shark species around the world are being harvested primarily for their fins and the Galapagos Marine Reserve remains one of the last regions where these creatures can be seen gathered by the hundreds. It is vital to establish a local and permanent surveillance and patrolling platform that will deter illegal fishing vessels from entering these waters.

Because the park lacks inadequate funding, trained personnel and equipment, it is challenged to prevent illegal fishing by industrial scale boats. In response, the GMBF supports the maintenance of park patrol boats while also helping to make current small-scale fishing practices more efficient.

Funds are also allocated to refurbish and maintain a speed boat that patrols the Bolivar channel between the western Islands of Fernandina and Isabela. These islands are visited by passengers on Ecoventura programs.

Funds from GMBF have also been allocated to benefit families of local fishermen by development of a microenterprise for the fisherman’s wives to manage. This will provide an alternate means of income and also set an example to create other tourism related businesses and reduce the need to fish.
Posted by rodeime