When Airships Conquered the Sky 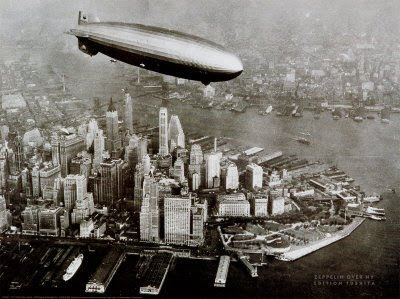 Zeppelin's First Flight Around the World

It is doubtful whether the jubilant crowd in Friedrichshafen that greeted the completion of the 20-day round-the-world trip by the LZ 127 airship on 4 September 1929 saw the event as a milestone in individual freedom of travel. At that time, their joy almost certainly had more to do with the fact that the town on the banks of Lake Constance had been the birthplace of the idea for that unique journey and the first ever circuit of the Earth by an airship. The airship pioneer Hugo Eckener – it was he who had taken over the life's work of Count Ferdinand von Zeppelin – and the LZ 127 airship he piloted accomplished epoch-making achievements which created new realities in global air travel. As a result, he left a lasting mark on an era in which German pioneering spirit attained world renown in the field of technology. The Atlantic crossings of the zeppelins, the flight around the world and the journey to the Arctic in 1931 remain an unforgettable chapter in the history of aviation which established new dimensions in passenger transport. Those days saw the beginnings of a revolution in transport which was to conquer the air in years to come.

The history of the airship and its flights – and in particular of the first ever round-the-world flight in 20 days – is exciting and real. The idea for such an undertaking was primarily expressed in the fictional journey of Phileas Fogg and his servant Passepartout who notionally rounded the world in 80 days by train, boat and elephant in 1872 on the pages of Jules Verne's famous novel. But what is the rescue of the princess Aouda by Fogg and his companions against the true heroics of an airship engineer? At an altitude of between 200 and 500 meters, which was the height at which airships usually flew, they had to climb down an open ladder into the engine gondola and stand watch there for at least two hours. The journey to Tokyo, for instance, lasted 101 hours, which meant the engineers changing places over 50 times, each time climbing up and down the ladder regardless of the wind and weather at the time.

The LZ 127 airship had been named the "Graf Zeppelin" by his daughter Hella on 8 July 1928 – the day that would have been the late Count's 90th birthday. In nine years it spent a total of around 18,000 hours in the air, initially powered by five V12 Maybach VL1 engines, traveling 1,695,272 kilometers and carrying over 13,000 passengers. From August 1931 to 1937, the "Graf Zeppelin" made a total of 74 trips to South America and Rio de Janeiro as part of a regular service for passengers, freight and mail. "All that is great is educational as soon as we are aware of it", wrote Johann Wolfgang Goethe over 100 years before to his confidant and secretary, Johann Peter Eckermann. And that is particularly true of airship travel. Because the pursuit of extreme lightness of design not only placed great demands on the Zeppelin factory and its engine supplier, Maybach, but also on the close on 100 subcontractors who were challenged to achieve genuine milestones in quality and reliability by the technology of airship construction and were committed to those standards. By that time, if not before, "Made in Germany" had come to represent quality of the highest levels. And that was an achievement in which, ultimately, the zeppelins played no small part. It was the airship that was ultimately responsible for the creation of the 12-cylinder engine as cars provided no impetus for the development of large-scale engines. Thus, once again, the engine was the motor for changes in the world and in people's freedom of movement. Travel had for generations and centuries been the privilege of the powerful and high-born. When ordinary mortals set out on a journey, it was usually their last – in a simple carriage out to a field. It is no accident that the stories of great journeys in the past remain popular today. Think of the Three Kings from the East, of Marco Polo, Christopher Columbus, or Fernando Magellan, the first man to circumnavigate the Earth, of the tough seafaring Norsemen, the Vikings, who sailed as far as North America in their resilient and battle-tested rowing boats. Traveling across country, over water and through the air is one of mankind's most ancient desires, one which has triggered an infinite variety of impulses and explorations and ceaselessly occupied many great thinkers and minds.

The wheel has always been the symbol of motion and the wing the symbol of freedom and escape from earthly constraints. That pursuit of mobility, with which thoughts of personal freedom were naturally associated has also always held within it a risk for life and limb. It was never without danger to venture into new elements or travel to strange countries. And perhaps that was the reason why progress in that area was made in such small steps for such a long time. It was left to men like Hugo Eckener, the obsessive airship engineer, and the equally obsessed engine designer Karl Maybach to create new directions and visionary breakthroughs in travel on land, water and in the air. On 6 July this year, it was 125 years since the birth of Karl Maybach. The airship engines, the first 12-cylinders built in Germany, undoubtedly rank among his greatest achievements. And even today, more than 40 years after his death, some of his design innovations remain fundamental and indispensable to the modern diesel engine.