The story behind Costa Crociere is a story of entrepreneurial success.

It was established in 1854 under the name of the founder “Giacomo Costa fu Andrea” and was so successful in the trading of fabrics and olive oil between the markets of Genoa and Sardinia that it soon set up a fleet of ships transporting goods all over the world; and by the end of the last century its goods reached far-away shores such as Australia, where the constant flow of Italian emigrants generated a market for national foodstuffs.

Costa was specialized in the purchase of raw olive oil in the Mediterranean countries for export overseas.

In the first decade of the twentieth century Costa was in a position to enter the naval field: in 1924 the small steamship Ravenna was used to supply raw materials to markets in the western Mediterranean and in 1928 the Langano was added to the fleet.

The thirties saw the start of the tradition of naming the ships after members of the family: Federico (’31), Eugenio and Enrico (’34), Antonietta, Beatrice and Giacomo (’35).

At the start of the Second World War the fleet boasted eight ships for a total of 27,534 tons.

Only the Langano survived the war, but Costa took up its shipbuilding activities again, building and buying other ships for coastal trading. 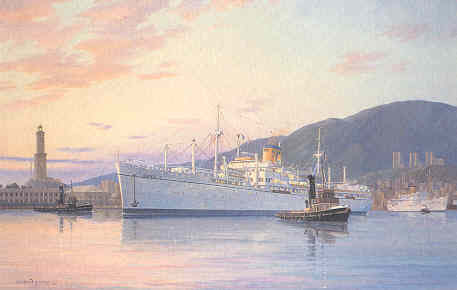 The destruction of the Italian passenger fleet, the growing demand for passenger traffic, the economic crisis and the flood of emigrants across the ocean drew the attention of the far-sighted Costa family, and in 1947 they inaugurated a new passenger service, first class - equipped with air conditioning - and second class. It was the steam ship Maria C. that began to meet the first demand for passenger transport, quickly followed by the Anna C. (pic right), the first Italian transatlantic to cross the western Atlantic after the war. In 1947 Giacomo Costa fu Andrea became “Linea C.”.

The commercial services towards North America were inaugurated in 1948 with the art nouveau style ship Maria C., soon flanked by the Luisa C. In 1953 the Franca C. opened new routes towards Venezuela and the Antilles.

The launching of luxurious, new ships, equipped with air conditioning in first and second class and with comfortable and elegant rooms, impeccable service offering hospitality, comfort and the best of traditional Mediterranean cuisine denoted the unmistakable Italian style.

A style which reached its zenith in the fittings, the furnishings and the architectural styles.

Even Giò Ponti, director of the magazine Domus, turned his attention to naval matters and mentioned the architectural and decorative aspects of the Costa fleet. A tradition which continues today.

The ships were divided into three classes (first, second and tourist), the entertainment and the attractions for the passengers, whether adults or children, are still a characteristic of the Costa fleet which has been continuously growing since the fifties. 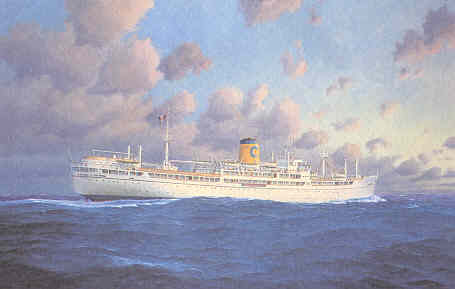 Bianca C., Enrico C., Andrea C.(pic left), Flavia, Fulvia and Carla C. were refurbished in the fifties to offer something more than a mere means of transport. Until the inauguration of the first ship commissioned by Costa from the Genoa shipyard Ansaldo.The Federico Costa, still divided into three classes, was equipped with restaurants and unusually shaped swimming pools.

In 1959 Costa realized the first ship in the world completely dedicated to pleasure cruises of 7 and 14 days in the United States and the Caribbean: the Franca C., flanked in the winter months by the Anna Costa, which proposed 3 or 4-day mini cruises starting from Port Everglades to Bahamas. The early 1960’s were triumphal and the by then customary routes in South America or the Caribbean were joined by cruises in the Mediterranean, the Black Sea, in Brazil, Uruguay and Argentina, right down to the Straits of Magellan and the Antarctic. The success of the Linea C was such that in 1964 the Company ordered the construction of the Eugenio C. Immediately christened “the ship of the future” thanks to its fittings and its elegance. 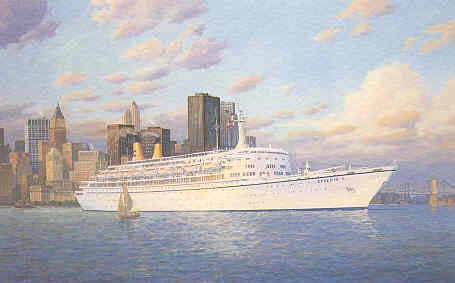 A ship no longer formally divided into three classes, but conceived as a single deck, onto which all the lounges face. A clear indication that the Eugenio C. (pic left) would be totally dedicated to cruising, the choice for the future of Costa Armatori. In 1968 the first ship exclusively used by passengers, the Franca C. inaugurated the formula of “fly and sail”, destined to revolutionize the conception of holidays and offering holiday-makers with little time to spare the opportunity to take short cruises in distant parts of the world. Once again the evolution of tourism has proved Costa right, during the seventies the fleet was increased with ships leased or bought outright.

Particularly noteworthy were the splendid twins Daphne and Danae, who sailed the Mediterranean in the summer and the Caribbean in winter, with trips to Alaska, Scandinavia, South America, Africa and the Far East.

During the eighties the idea of the ship as a floating hotel became increasing accepted.

The ships became holiday resorts, the division between the classes disappeared completely, the cabins tended to become more uniform and the places of entertainment multiplied: bars, theatres, casino, discotheque. Everything was available to everyone. Building on the foundations the cruising industry in general and Costa Armatori in particular prepared for the great leap in quality represented by the founding of Costa Crociere in 1986. 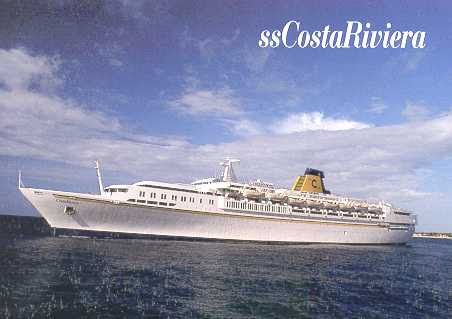 But once again, the ships are the stars of the enormous development of the company, from the Costa Riviera, completely refurbished in 1985 and in 1998, to the ships built in the nineties; the Costa Marina, the Costa Allegra, the Costa Classica, the Costa Romantica and in 1996, the splendid Costa Victoria.

Not to mention the Mermoz and the Costa Playa (later sold), purchased in 1993 when Paquet Cruises of the French group Chargeurs & Accor was dismantled.

In 1997 the company was purchased by the American firm Carnival (50%) and the English firm Airtours (50%), increasing the investment capacity of the Genoese company while maintaining its identity as an Italian company.

The growth of Costa Crociere has never stopped. In November 1999 the technical launching of the Costa Atlantica, the new flagship christened in the wonderful setting of Riva ai Sette Martiri in Venice in July of 2000, opens a new page in the company history. 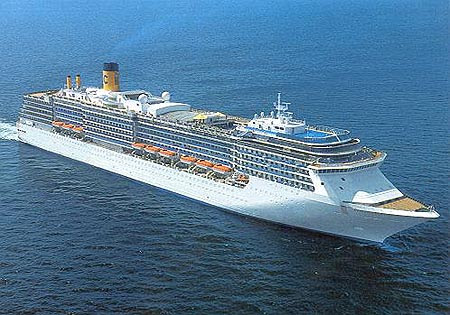 The Italian flag returns, after about ten years, to wave on the yards of Costa’s ships and the company introduces a new concept never seen before. With its dimensions, which makes her the biggest passenger ship in the history of Italian maritime, the Costa Atlantica (pic left) opens the path to the new company development guidelines: comfort cabins like grand hotel rooms, most of with a balcony, a series of unforgettable ambiences and atmospheres which will attract new passengers to the cruise experience.

In August 2000, Costa Crociere announced the order of the Atlantica’s twin ship, the Costa Mediterranea.

At the end of September 2000, The Carnival Corporation, having purchased all shares from Airtours, became the sole shareholder of Costa Crociere, Genoa.

This change gives a further incentive to the Development Program of Costa and confirmed a new deal with Fincantieri in Genoa Sestri Ponente to build two new 102,600 ton cruise ships and with a total passenger capacity of 3,470, the Costa Fortuna and the Costa Magica, for delivery at the end of 2003 and 2004. The expansion of the company has been possible by the addition in June 2001 of another ship, the Costa Tropicale, originally belonging to Carnival Cruise Lines, which was completely refurbished in the style of other Costa ships. Moreover, in March 2001, Costa announced the purchase of the ship Westerdam from the American sister company Holland America Line, which entered in service at the end of April 2002 under the name of Costa Europa. 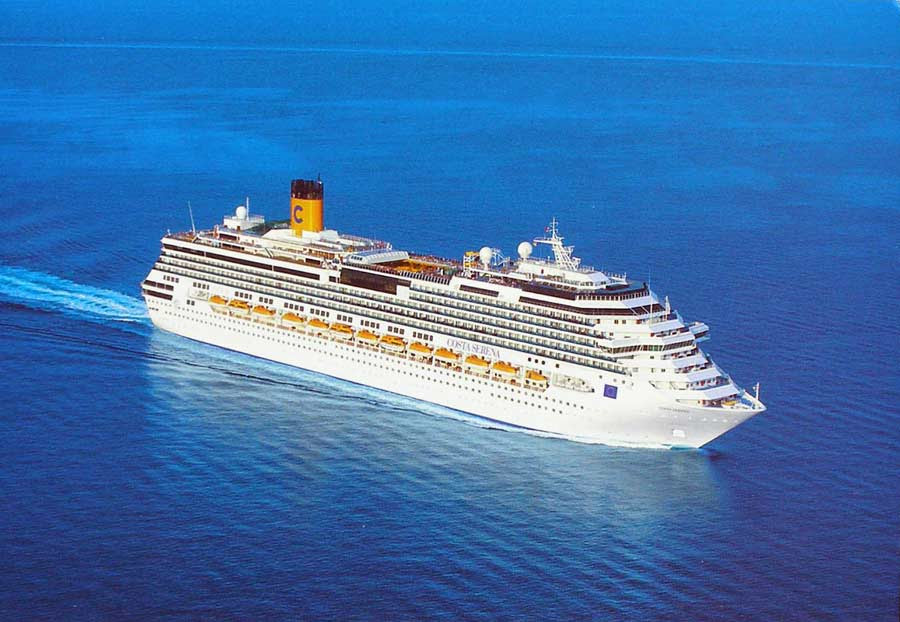 The Costa Mediterranea, twin sister of the Costa Atlantica, was delivered to the company on May 22, 2003. November 14, 2003 marked the arrival of the Costa Fortuna. The Palacrociere, Savona's new cruise terminal, jointly financed and managed by the company, was opened on November 24, 2003. In January 2004 Costa Crociere announced the signing of a letter of intention with Fincantieri for the construction in Sestri Ponente of another new ship with a tonnage of 114,500 tons and with a total passenger capacity of 3,780, the Costa Concordia, which will go into service in the summer of 2006. On October 29th, 2004 the Costa Magica, twin sister of the Costa Fortuna, was delivered. In the same year Costa Crociere S.p.A. acquired the brand AIDA Cruises, the cruise leader in Germany. In January 2005 Costa Crociere announces the order to Fincantieri for a twin sister ship of the Costa Concordia, the Costa Serena (pic above left), which will be ready in spring 2007, and transfer of the Costa Tropicale to the P&O Australia brand in October 2005. The growth programme of the fleet continued in December 2005 with the announcement of a third sister ship of the Costa Concordia and of the Costa Serena, named the Costa Pacifica, to be delivered by Spring 2009.

In 2006 Costa announces its expansion in Asia Pacific and in Dubai, confirming its international character. In June 2006 Costa placed an order with Fincantieri for two new 92,700-ton ships to be built at the Fincantieri Yard in Marghera, the Costa Luminosa (pic right) and its sister ship, which will come into service in Spring 2009 and 2010. In July 2006, the Costa Concordia came into service and in February 2007, Costa announced new exclusive itineraries from Mauritius to the Seychelles, Kenya and Madagascar. In April 2007, the new “Palacruceros” terminal, owned and financed by the company, was inaugurated and in May 2007, the Costa Serena was delivered. On July 17, Costa Crociere reached a historical record in Europe: 1,000,000 Guests booked in only one year. The announced joint venture between Costa Crociere S.p.A. and Orizonia Corporaciòn was approved for the creation of the brand “Iberocruceros”, belonging to the Costa group and operating in the Spanish market. In October the order to Fincantieri for 2 further ships of the “Concordia” class was announced.

Costa thus enters the third millennium with an expansion program that will enable it to maintain its European leadership in a fast growing market. The fleet that will fly the Italian merchant marine flag in years to come will be even more modern, offering Italian-style hospitality and an unparalleled showcase of Italy's artistic trends.