Around the World with Cunard

Many still believed the world was flat when Ferdinand Magellan set out from Spain in search of the Spice Islands of Indonesia in 1519. Three years later, with Magellan himself dead and just one ship and 18 men remaining, the first known circumnavigation of the world was completed.

Such is the allure of adventure and exploration that today, nearly five hundred years later, the thrill of a journey around the world by sea is just as intoxicating and exciting as it was then.

The great ocean voyages are the ones that have defined us as a race and a species.

Perhaps the pinnacle of ancient maritime architecture were the enormous Chinese Ming-dynasty treasure ships of the 15th Century. These wooden leviathans dwarfed the petty craft sailed by Magellan, da Gama and even Cook with the largest of these vessels measuring some 150 metres, over five times more than Cook’s Endeavour. It is now known that vast fleets of these huge ships, and their supporting entourage, ranged throughout the Indian Ocean, stamping China’s colonial authority on lands as far away as South Africa, perhaps even further.

It wasn’t until the coming of the Industrial Revolution and the widespread use of iron and steel before this mark could be surpassed. In 1858, after enormous technical and financial difficulties, the SS Great Eastern was launched. At 211 metres, she was the largest ship ever built and was designed to carry as many as 4000 passengers on transatlantic voyages. Her size was her undoing and after a series of accidents and mishaps, she was finally broken up in 1890. 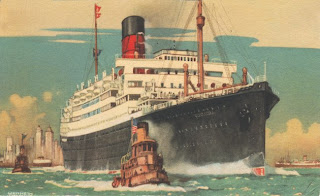 The 20th Century saw the great ocean liners come of age and the stories of RMS Titanic, Britannic and others are well known. But the story of Cunard’s RMS Laconia (pic left) has almost faded into insignificance. In 1923, she became the first passenger vessel to circumnavigate the globe, taking 130 days and visiting 22 ports. Built by Swan, Hunter & Wigham Richardson at Wallsend-on-Tyne, she was launched in April 1921 with a gross tonnage of 19,860 tons and a length of 183m. For a relatively small ship by today’s standards, she still managed to carry around 2200 passengers and was one of the first Cunard vessels to exploit “cruising” for pleasure’s sake.

Cruising for pleasure and indeed, world cruising, is now almost commonplace. Yet the vessels undertaking today’s voyages are anything but and are virtual palaces of the sea. Without doubt, the most prestigious world cruiser is Cunard’s newest Queen, the Queen Mary 2. She preserves all that is traditional and romantic in a great ocean liner without compromising luxury or prestige.

On January 2, 2009, Queen Victoria (pic right), currently Cunard’s newest vessel, embarks on her World Tour, departing Southampton for a round trip of 109 nights.

Hot on her heels, Queen Mary 2, leaves Fort Lauderdale, Florida, on 13 January 2009 for a 92-night “Epic Expedition”, culminating in New York on 14 April after visiting 28 ports.

Even if you don’t have the time or the inclination for such a singular undertaking, cruise sectors are available between many of the major ports, allowing you to indulge your passion for ocean cruising in shorter segments.

Regular Cunard Inner Circle award winning agency, www.ecruising.travel, consistently offers the best value packages for any of the famous queens. This time next year, Queen Mary 2 returns to Sydney as part of her World Tour and presents the best opportunity to sample her many charms at affordable prices. Right now, ecruising.travel is offering an unprecedented 50 per cent off the Sydney to Singapore sector with staterooms beginning at just $4999.00. Almost unbelievably, this package includes 16 luxurious nights aboard QM2 as she sails the romantic Orient. To complete the scene, the price includes one night at the iconic Raffles Hotel and airfare home. Other sectors are available too. Imagine a 25-night Pacific Ocean crossing from Santiago to Sydney or a 49-night Southampton to Sydney via the Panama Canal. These magnificent voyages are no longer a thing of fantasy. Contact ecruising.travel on 1300 369 848 or visit www.ecruising.travel for all the details on any Cunard Queen voyage.
Posted by rodeime