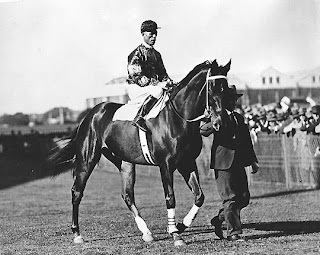 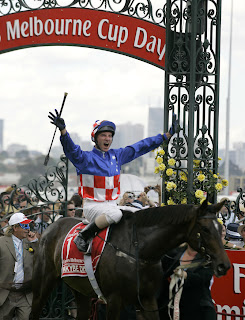 OWNERS of nags that have won the Melbourne Cup haven't always been the most appreciative types when it's come to accepting their prizes – but then they didn't get what owners do today when their steeds win the richest handicap horse race in the world.

In fact when Toryboy won the Cup in 1865 his owner was so horrified with his trophy that he sold it.

And in the early 1890s others growled when their 'cups' turned out to be not grand gold or silver affairs to show-off on the mantle-piece, but rather bone-china types for taking tea.

And John Mayo whose horse Lord Nolan won the Cup in 1908 didn't even get a cup at all: he got a near-metre long wooden plaque atop a garish red base, and on which was mounted a silver silhouette of a galloping horse – that local wits reported looked more like a galloping greyhound.

While somewhat bemused, Mr Mayo accepted his winnings in good spirit from the Governor-General – to whom he'd earlier given a tip that Lord Nolan would win the Cup – and took his horse and his trophy home to Newcastle.

Another of the more unusual Melbourne Cup trophies was that won by Mentor in the Centennial Year 1888. It comprised three silver horses on a silver-plated base, the lot weighing 280 ounces (nearly 8kg) and costing around $5000.  When it sold at auction in 1987 it fetched a whopping $177,000.

In some years there were no trophies at all, just cash, and from 1942 to 1944 Cup winners were awarded War Bonds.

The first Melbourne Cup winner's prize in 1861 was a gold watch. It was won by the owners of the great Archer which had been walked 800km from Nowra to Melbourne by a group of stable-hands, a journey that took three weeks – and the horse won again the following year, but this time got to Melbourne by steamer.

The first owner to publicly criticise his Cup trophy was Mr B.C. Marshall, when his Toryboy won the 1865 race.

The outspoken Melbourne draper told Victoria Racing Club officials his $200 silver bowl topped with a horse and rider was "a monstrosity," and promptly sold it to the Flemington Hunt Club which inscribed it with the names of winners of its annual Hunt until Melbourne ran out of foxes.

Melbourne stockbroker W.T. Jones was the first 'tea- and coffee-cup' recipient when his horse Bravo won the Cup by a length from the formidable Carbine in 1889. As well as a purse of cash, his prize contained a set each of cups, saucers, tea and coffee pots, presumably so he could have folk around to discuss Bravo's success.

Similar packages continued to be awarded over the next few years, prompting one outraged owner to tell the Melbourne Press that such trophies were "to the proper glory of the Melbourne Cup as flat soda water is to live Champagne."

The controversial prizes were replaced by more conservative trophies in the early 1900s, after Mr Mayo received that somewhat cumbersome plaque for Lord Nolan's win.

Mr Mayo had never doubted his horse would win the Cup, and on a tram from his Melbourne hotel to the race track proffered such advice to anyone listening – and at the track, to Governor-General, Lord Dudley.

After the race, the G-G confided how "a strange, grey-headed old man told me before the race that Lord Nelson would win; I took little notice – then to my astonishment he came up to collect his prize."

By the 1920s a 'loving cup' design had been permanently adopted; today's gold cups are valued at around $190,000 each – and for good measure come with cash components for first, second and third place winners comprising a cosy $5.5m.

And the legendary Phar Lap that was bought for a mere $330 and earned over $100,000 in prize money, won only one Melbourne Cup from three starts – in 1930. Race-fixing criminals had tried to shoot him four days before the race, and he later died of arsenic poisoning.

[] THE mighty Phar Lap: one only one Melbourne Cup just days after race-fixers tried to shoot him – and he later died of arsenic poisoning.