How to blow a vuvuzela and other things you should know about soccer in South Africa. 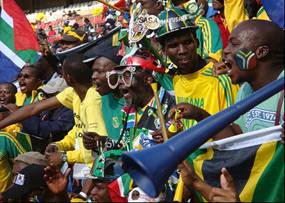 NAVIGON, one of the world leading innovators of navigation systems, provides soccer fans with information and insights into the South African soccer culture, and with some tips on what to pack for the trip when going to South Africa.

"There's been a lot of communication about South Africa, but not a lot of elaboration regarding the South African soccer culture and the unique experience waiting for visitors to this great land," said Stephan Balte, country manager South Africa at NAVIGON. "From youngsters in the townships and at schools nationwide, to older generations at backyard pubs and workplaces throughout the nation, soccer is known, discussed at length and loved by most South Africans. The country has even developed its own special interpretation of the game."

Do that Diski dance

Soccer is played in a number of different ways: rhythmically, sometimes a little showy, but it is never boring. Diski is a uniquely South African soccer style and every move has a name originating from different parts of the country and in different languages. Some are in Tswana, others Zulu, Sotho and even English. With names like 'Tsamaya', 'Heel Extension Mkhari', 'Shibobo' and 'Chester' you can't go wrong. Five of the moves have been put together to create South Africa's Diski dance and you'll soon start feeling the rhythm of African football once you've mastered the routine. So what are you waiting for?

South African fans enjoy an almost ceremonial ritual as they dress up for the game with the wearing of a makarapa (a modified, decorated miners' helmet unique to South African soccer fans) and the draping of team flags around their shoulders. The name makarapa means 'migrant worker', after the mine workers in the mines of the Witwatersrand in Gauteng, was used in the late 70's and early 80's. There are many makarapa artists in South Africa that make a modest living from designing makarapas and selling them to sports fans of all kinds.

Some of the unique makarapas (Source: South African Tourism)

Learn to blow the vuvuzela

They are loud, festive and bring soccer matches to life. The vuvuzela's unique sound will take some getting used to, but you will certainly have an unforgettable soccer experience with these horn-shaped instruments that are used by fans to cheer for their favourite teams. Originally made out of tin, the vuvuzela became popular in South Africa in the 1990s. Be warned though, it requires large amounts of lung strength to blow and emit a monotonous noise like a deep foghorn or an elephant.

Because there is so much to explore in South Africa, renting a car may be a good option to find the soccer stadiums and ensure you don't miss any aspect of the country's diverse culture and unique offerings and absorb as much scenery as possible.

NAVIGON's iPhone navigation application can help by making sure that you find your destination safely and hassle free. The "Avoid Dangerous Areas" function even routes around dangerous areas. This easy to use application doesn't require you to purchase a separate device or carry any extra luggage. Just simply visit the iTunes store online and download. For a very limited period only, NAVIGON offers a special soccer promotion for the South African iPhone app that provides fans with a 63 percent discount. From May 31 until June 6, the app will sell for $29.99 instead of $79.99.

Packing for South Africa is always a bit difficult since you can experience all four seasons in one day. To make sure that you aren't caught in a mid-winter Highveld thunderstorm or a cold front that the weather report didn't mention the previous night, ensure that you have a mix of warm clothing for the days and nights that can become quite chilly. These would include fleece jackets, tracksuits and long-sleeved t-shirts, whilst a raincoat would be a good piece to have, particularly in our mid winter months, June and July.

You can also find us at: