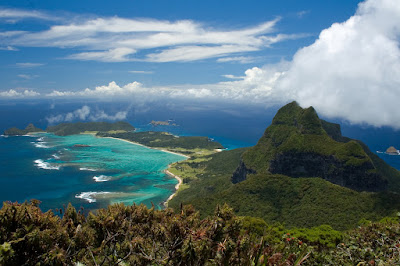 Be spellbound by Lord Howe Island's legendary beauty, starting at $719 for five nights. Cool season packages for Australia's closest Pacific island paradise are on sale until May 22, for travel between June 1 and August 31, 2010.

Deals start at $719 for five nights in a self-contained apartment, and range across traditional guesthouses to luxury lodges, including special discount flights with QantasLink and island transfers – and it's less than two hours' flight from Sydney or Brisbane.

Lord Howe is that travel cliché: a well-kept secret. Yet those in the know ranked it Number One holiday destination in Australia for visitor satisfaction in a 2009 Tourism Research Australia survey*.

World Heritage-listed, the island has a limit of just 400 visitors, and is revered as the most beautiful island in the Pacific. There are no resort complexes or nightclubs, just 11 golden sand beaches to choose from, a network of walking tracks along the cliffs and through palm and banyan forests; and family-owned accommodation. Water-wise, there's kayaking, fishing and SCUBA diving or snorkelling on the pristine coral reef – the world's most southerly.

The island is also one of the world's best bird-watching destinations and the cool season is when many of the 130 resident species come home to nest.

It's a little-known wonder, but those who have discovered the secret have been coming back to Lord Howe for generations.