No35 WINS BEST RESTAURANT OF THE YEAR 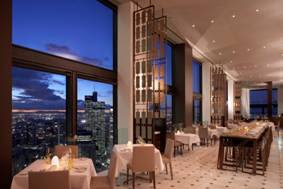 Sofitel Melbourne On Collins' No35 has won Restaurant of the Year at the Australian Hotels Association's (Accommodation Division) 2010 State Awards for Excellence dinner (held on Friday the 7th of May 2010).

Less than twelve months in operation, No35 was up against seven finalists in this category, with the judges awarding points for the menu, wine list, food presentation, originality, service décor, ambience, and product knowledge.

Sofitel's General Manager, Clive Scott, said the award had come at a most opportune time for No35, particularly as the restaurant was less than a year old and that Restaurant Chef, Stuart McVeigh, was doing an excellent job after joining No35 in October 2009. "Stuart McVeigh is inspiring the kitchen brigade with his remarkable culinary skills by producing outstanding and very original dishes.

"The magnificent views coupled with the décor of dark timbers, coloured glass highlights and a sophisticated palette of gold, red and pink tones, provides our guests with an elegant dining destination.

"We hope that this will be just one of the many awards for No35 in the future.  Our aim is to deliver outstanding cuisine in the heart of Melbourne that will hopefully be as breathtaking and memorable as the restaurant's exceptional views" said Clive Scott.

The restaurant serves modern cuisine, using only the freshest local ingredients with an emphasis on pure flavour, matched by relaxed, uncomplicated service.  Complementing No35's food philosophy, Sommelier, Kyriacos Christodoulou, selects wines that are true to their origin which reflect their regional integrity. The service team is led by Restaurant Manager, Owen Gibbons.