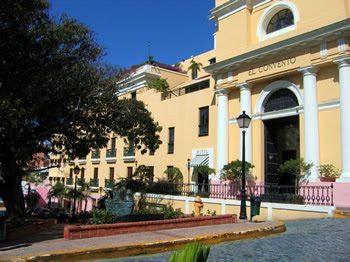 In this first of a two-part feature, David Ellis discovers a boutique hotel in Puerto Rico with a history as rich as any tale Hollywood could conceive out of the Caribbean; and next week he continues its remarkable journey from convent to flophouse to an extraordinary boutique hotel...)

ITS anyone's guess what the good ladies who founded the Carmelite Convent in San Juan in Puerto Rico a-near 360 years ago, would make of their old one-time digs today.

Gone are the tiny celibate cells in which they spent long and solitary days in prayer or meditation, gone are the thin straw palliasses on which they fitfully sought sleep through steamy Caribbean nights, and gone are mealtimes of  porridge or gruel or root vegetable stews in keeping with their vows of poverty.

In their place are spacious rooms with 21st century luxuries amid centuries-old antiques and heirlooms, queen-size beds in which guests indulge in the deepest of the Land of Nod, and from the kitchens now come breakfasts of Eggs Benedict, banana and walnut pancakes topped with maple syrup, mountainous Yogurt Parfaits topped with crunchy almonds, walnuts and fresh sweet strawberries…

Or amongst a score of dinner options, the Caribbean's highly popular Puerto Rico Mofongo: fried green plantains seasoned with garlic, olive oil and pork crackling, all mashed and filled with chicken, steak or shrimp. Or for more simple pleasures, multitude tapas or a half-pound (226gm) Classic Burger with the lot. 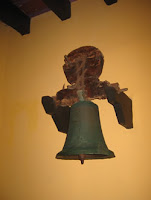 And in what was once a private room of the Mother Superior, nightly pre-dinner wine and cheese tastings for guests fortunate enough to stay here, with reds and whites splashed with gusto into voluminous crystal glasses … for an hour or so, for free, with great slabs of cheeses and dried fruits to go with it.

The old Carmelite Convent, as we quickly learned on a recent visit, has undergone somewhat of a transformation from its religious heyday: it's now one of the world's finest small hotels, with a history as captivating as any tale out of the Caribbean.

San Juan itself was established by the Spanish in 1521 as a stop-over between homeland and America. They built a garrison against their French, Dutch and English enemies, and with constant wars with all this lot, the number of widows on the island was considerable.

So one, Dona Ana de Lansos y Menendez de Valdez asked the King of Spain to build a convent for widows and single ladies wishing to serve the church.

When he agreed, and with her own personal wealth, Dona Ana donated her home opposite the San Juan Cathedral as a site for the Convent.

Spanish soldiers were assigned to build it, and strongly enough to withstand assaults by local Indians, Spain's European enemies, hurricanes, and the tropical heat: its sun-baked clay-brick walls were made a metre thick.

In 1651 Dona Ana, her sister Antonia and four protégés were the first to enter the Convent, with Dona Ana as Mother Superior; the Convent served its role well for 252 years until in 1903 it was decided that maintenance was now too costly, and with only nine nuns and two novices in residence, it was closed.

The building lay empty for a decade and was eventually sold for a mere US$151 by the Carmelite Order to the local Catholic Diocese, which rented it out as a retail store, then a dance hall, and for 40 years as a flophouse for the homeless.

Worse, in 1953 it became a storage yard for garbage trucks until it was decided to demolish it to make way for a public parking station.

Enter Robert Frederic Woolworth – heir to the Woolworth fortune – who was so aghast at the prospect of the historic old Convent's fate, that he bought it from the church for $250,000, engaged a team of architects and builders and turned it into a boutique hotel he would call The El Convento.

NEXT WEEK: Creating a unique hotel with dedication, a "no expense spared" philosophy – and a band of gypsies.

[] THE hotel's shaded courtyard, a far cry from the vows of poverty of its original inhabitants

LAST week we looked at something of the history of the extraordinary Hotel El Convento in San Juan, Puerto Rico – how it began life as a Carmelite Convent a-near 360 years ago, declined into a flophouse for the homeless in the 1900s, became a parking lot for garbage trucks, and in 1957 was slotted for demolition to make way for a carpark…

AND a carpark it would doubtless be to this day had it not been for the unbridled enthusiasm of an unlikely benefactor, heir to the Woolworth retailing fortune, Robert Frederic Woolworth who was horrified when he learned of the potential fate of the historic old Convent from head of the Institute of Puerto Rican Culture, Ricardo Alegria.

Woolworth had personal business interests in San Juan, and when Alegria introduced him to Operation Bootstrap that sought to save the old Convent as part of a plan to develop local tourism – and along the way boost other business opportunities and thus employment – Woolworth dug into his pocket and personally bought the Convent from the Catholic Archdiocese of San Juan for US$250,000.

And he then set about converting the crumbling 300 year old ruins into a boutique hotel like no other, and with a zeal that even the dynamic Alegria and his local business colleagues found hard to match – not just individually, but collectively.

Woolworth engaged firms of architects, structural engineers and interior designers to plan his “dream hotel” that he would call the El Convento – and after adding two floors to the Convent’s original three to create 100 hotel rooms, set about furnishing the place.

But what he had in mind was easier said than done. So he and his interior designer spent weeks in Spain seeking authentic items from its Golden Age… and when they couldn’t find originals, Woolworth commissioned reproductions of chandeliers, wrought-iron fixtures, louvered doors, tapestries, paintings, shields and swords, and had lampshades made from goatskins as they had been centuries before.

And when snookered in his quest for authentic bedspreads and rugs, the tireless Woolworth went to Granada and engaged bands of gypsies to hand-weave these items for him.

In January 1962 his grand Hotel El Convento opened, a throwback to an era when hotels were destinations in themselves, and with the El Convento offering extraordinarily lavish Old World Spanish accommodations in one-time nuns’ cells, fine dining in what was once the Convent’s chapel, and international-standard entertainment including Flamenco dances and big bands in other historic chambers and courtyards.

The rich and famous flocked there including Rita Hayworth, Robert Montgomery, George Hamilton, Lynda Bird Johnson, Ethel Merman, Johnny Desmond and Claudio Arrau… and Pablo Casals who would play his cello in the courtyard.

But running the hotel was neither easy nor profitable, and owing a huge amount in back-taxes to the Puerto Rican government, the Woolworth family in 1971 donated the hotel to the government in lieu of these taxes. Various groups dabbled with management of the hotel over the next eleven years, before it was closed again for a 10 months make-over in 1982.

And in 1986 new renovators were horrified to find wallboard had been nailed over historic arches, concrete render slathered over 300-year old handmade bricks, and red carpet glued over priceless handmade floor tiles. They painstakingly removed it all to get back to the original.

Management of the hotel changed several times more, and in the mid-1990s the Puerto Rico government gave up ownership and sold the ailing property to a group of local business executives who poured more buckets of money into it, and estimated that around US$275,000 had been spent on each guest room.

Conde Nast Traveler magazine now rates it one of the world’s best hotels, and as well as being one of the world’s most unique boutique hotels, it is also Puerto Rico’s official Guest House for visiting heads of state and other state-invited dignitaries.