ANTARCTICA BY A380 - THE COUNTDOWN HAS BEGUN! 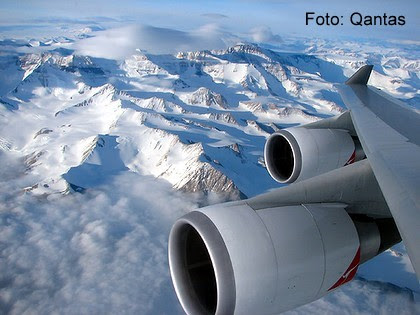 Aviation history will be made this evening when a Qantas Airbus A380 "superjumbo" – designated as flight QF 2903 – departs Melbourne, bound for Antarctica.

As well as being the only sightseeing flight over Antarctica this New Year's Eve, the aircraft also will be the first commercial flight by an A380 over the south polar region.

And not only will the 450 passengers and crew on board be among the first in the world to experience the first sunlight of the new year and the new decade – as occupants of the first commercial A380 over Antarctica, they will also become aviation pioneers.

The first A380 to Antarctica will be operated by Qantas on behalf of specialist Melbourne-based tour operator Croydon Travel  - a partnership which has operated 84 previous flights to Antarctica, all of them with Boeing 747 jumbo jets.

Tonight's flight is scheduled to depart Melbourne International Airport at 6.10, Australian Eastern Summer Time, and subject to weather conditions during the evening will then fly over Tasmania and direct to Antarctica, the world's coldest, driest and windiest continent – a journey of approximately four hours.

The aircraft will be under the command of senior Qantas pilot Captain John Dennis, who has flown 38 previous journeys to Antarctica. With him on the flight deck will be Captain Bruce Simpson, also a senior Qantas pilot, while in the cabin, the "Midnight Sun" flight activities will be coordinated by the head of Croydon Travel, Mr Phil Asker, who has made 45 previous flights to the ice.

Those activities start with Antarctic videos and briefings by Antarctica experts, a roving jazz band adding to the atmosphere throughout the night, a countdown to midnight (Australian Eastern Summer Time) and – of course – a rendition of Auld Lang Syne.

Antarctic viewing is best at this time of the year, when the region experiences almost continuous daylight, and anticipation turns to excitement and elation as the giant airliner approaches Antarctica.

The most frequently-selected flightseeing route takes sightseers over sea ice and the South Magnetic Pole about 3 ½ hours south of Melbourne, en route to the French research base of Dumont d'Urville.

There, the aircraft will turn and fly above the jagged coast of Antarctica, before heading inland and flying figure-eight patterns over glaciers and frozen terrain which stretches as far as the eye can see.

The final phase of sightseeing on a typical Antarctica flight takes the aircraft over the spectacular Trans Antarctic Range.

Then, as the festivities continue into the night and beyond into the new year, the A380 will depart the world's last great wilderness area and turn back towards Melbourne, arriving at approximately 5.20am on New Year's Day.

To maximise viewing opportunities for those on board, 19 flight tracks have been approved, enabling the operating pilots to pick the best available viewing.

Passengers flying to Antarctica will check in at Melbourne International Airport from 4.00pm today.
Posted by rodeime