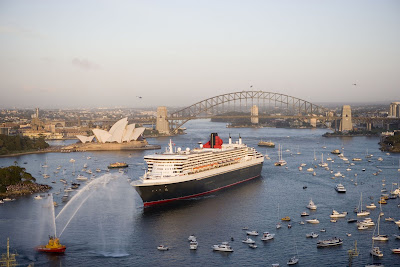 The cruise industry is forecast to contribute more than $3 billion to Australia's economy by 2020 but only if the federal and state governments can address port bottlenecks that are restraining capacity.

An Access Economics report on the cruise industry released on Monday found the sector was the standout performer in the tourism market in 2007/08 (2007/08) contributing $1.2 billion to the national economy.

Carnival chief executive Ann Sherry said port infrastructure was needed in Sydney in particular so the sector could reach its growth potential.

"The industry and government must work together to resolve outstanding issues such as capacity constraints," she said.

The industry's economic contribution in 2007/08 was up 54 per cent from $781 million the previous financial year, in gross output terms, Access Economics said in its second annual report on the sector.

In value added terms the contribution increased to $549 million, from $357 million a year earlier.

Access Economics predicts the cruise industry could achieve growth of seven per cent each year for the next decade.

This compared to the general holiday sector, where international tourism rose by a modest 3.9 per cent in 2007/08, based on visitor nights, and domestic tourism activity dropped 2.4 per cent.

Access Economics also said the cruise industry's market penetration could rise from one to two per cent of the Australian population in calendar 2009 to three to five per cent in 2020, bringing it into line with more developed markets such as the US, UK, and Germany.

"Carnival Australia expects the local cruise industry will carry one million passengers by 2020 but this target will prove elusive if holidaymakers who want to travel around a first class country are discouraged by second rate port facilities," Ms Sherry said.

"The importance of Sydney as a destination is critical to the growth of the cruise sector in terms of attracting international (cruise) tourists to Australia."

In Sydney, Ms Sherry said solutions are needed east of the Sydney Harbour Bridge to accommodate the bigger ships being built around the world.

"As our cruise ships increase in size, on 15 per cent of liners visiting Sydney in 2020 will be able to dock west of the harbour bridge," she said.