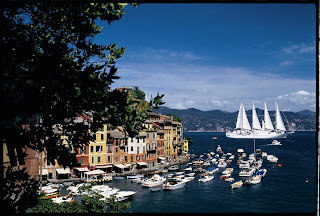 As voted by Porthole Cruise Magazine

Windstar Cruises has been named the "Most Romantic Cruise Line" for the fifth consecutive year by the readers of Porthole Cruise Magazine.

Comprising of a fleet of three luxury motor sailing yachts, Windstar transports its passengers to some of the world's most desired and sought after destinations, including the Greek Isles, the Caribbean and South America.  In addition to exotic locations, Windstar boasts luxurious facilities and an intimate feel with msy Wind Spirit and msy Wind Star accommodating 148 guests, and msy Wind Surf hosting 308 passengers.

With a smorgasbord of activities tailored to couples, including picnics on the beach, rejuvenating spa treatments and private shore excursions for two, a holiday onboard Windstar is the ultimate in relaxation at sea.

The Porthole Cruise Magazine award follows a series of accolades received by the cruise line in 2009 which include: 'Best Small-Ship/Mid-Ship Cruise Line' in American Airlines' Celebrated Living magazine, 'Favourite Small-Ship Cruise Line' award and 'Top 100 of the Best the Travel World has to Offer' in the UK's Condé Nast Traveller's 2009 Readers' Travel Awards, and top honors in Travel + Leisure's 'World's 2009 Best Awards'.

Windstar's Australian representative, Travel the World has released the cruise line's 2010/2011 itineraries which include a 7-day cruise from Rome to Barcelona priced from AUD $2,457 per person and the popular Athens to Istanbul cruise through the Greek Islands from AUD $4,125. Travel the World can also assist you in combining two 7-day cruises in the Mediterranean, enabling you to visit more of your favourite cities.

For those wanting pure sea indulgence, Windstar offers a number of 14-day cruises including Transatlantic voyages from Barbados and St Martin to Lisbon from AUD $1,993 per person and a Puerto Caldera to St Martin cruise through the Panama Canal from AUD $5,812 per person. These promotional fares are based on Category B cabin and are inclusive of taxes and port charges (subject to change due to currency fluctuations and capacity).

Windstar's positioning is '180 degrees from Ordinary' and the cruise line fulfils that promise not only with its array of itineraries, but also thanks to its Degrees of Difference program which has seen all three ships receive the latest in luxurious amenities from L'Occitane bathroom amenities, Bose sound speakers, iPod Nanos and luxurious linens and mattresses.

For further information or to make a booking with Windstar, contact Travel the World on 1300 766 566 or visit www.traveltheworld.com.au