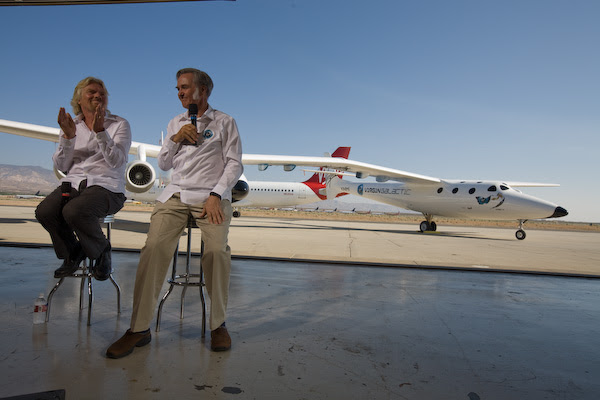 Virgin Founder, Sir Richard Branson and SpaceshipOne (SS1) designer, Burt Rutan, today reveal SS2 to the public for the first time since construction of the world's first manned commercial spaceship began in 2007. SS2 has been designed to take many thousands of private astronauts into space after test programming and all required U.S. government licensing has been completed.

The unveiling represents another major milestone in Virgin Galactic's quest to develop the World's first commercial space line providing private sector access to space using an environmentally benign launch system for people, payload and science. The spaceship draws on the experience developed during the successful flights of SS1 in 2004, which won the Ansari X-Prize for completing the world's first manned private space flights. The SS2 design will be refined and completed during an extensive test flying program to commence shortly, and it will be an entirely new vehicle capable of carrying up to 6 passenger astronauts and up to 2 pilot astronauts into space on a sub-orbital flight.

The unveil itself will take place at Mojave Air and Spaceport as darkness falls on the famous aviation and spaceflight location. Subject to certain U.S. regulatory requirements that will guide the unveiling, SS2 will be attached to her WK2 mothership which was last year unveiled and named EVE after Sir Richard Branson's mother. In the future, WK2 will carry SS2 to above 50,000 feet (16 kilometres) before the spaceship is dropped and fires her rocket motor to launch into space from that altitude. In honour of a long tradition of using the word Enterprise in the naming of Royal Navy, US Navy, NASA vehicles and even science fiction spacecraft, Governor Schwarzenegger of California and Governor Richardson of New Mexico will today christen SS2 with the name Virgin Space Ship (VSS) ENTERPRISE. This represents not only an acknowledgement to that name's honorable past but also looks to the future of the role of private enterprise in the development of the exploration, industrialisation and human habitation of space.

The emergence of new commercial space companies like Virgin Galactic will be an engine for employment, growth and the creation of a new technology and science base in the United States. Recent research has indicated that 12,500 jobs have already been created by the new space companies; the Virgin Galactic project alone is creating significant opportunities for employment in both the company itself and with suppliers in both California and New Mexico. Approximately 600 people are now working on activities relating to the project and it is estimated that this figure will rise to over 1,100 jobs during the peak of the construction phase at the space port and through the introduction of the commercial space vehicles into regular astronaut service.

Both WK2 and SS2 represent state of the art environmentally sensitive industrial development in their use of carbon composite materials technology, which has now been identified as a key future contributor to the increasingly urgent requirement by the commercial aviation sector for dramatically more fuel efficient aircraft. WK2 is powered by four Pratt and Whitney PW308A engines, which are amongst the most powerful. economic and efficient commercial jet engines available making it a mould breaker in carbon efficiency. SS2 will be powered by a unique hybrid rocket motor, which is currently under development.

The twin fuselage and central payload area configuration allow for easy access to WK2 and to the spaceship for passengers and crew; the design also aids operational efficiencies and turnaround times. The mothership has now also completed a year of rigorous and successful first phase flight testing prior to today's attachment of SS2.

Commenting on the unveiling, Sir Richard Branson, Founder of Virgin Galactic said: "This is truly a momentous day. The team has created not only a world first but also a work of art. The unveil of SS2 takes the Virgin Galactic vision to the next level and continues to provide tangible evidence that this ambitious project is not only moving rapidly, but also making tremendous progress towards our goal of safe commercial operation".

Burt Rutan, Founder of Scaled Composites added: "All of us at Scaled are tremendously excited by the capabilities of both the mothership and SS2. Today is the culmination of a dream that began many decades ago, was stimulated by Paul Allen's funding of our X-Prize winning SS1 and then moved forward to commercial reality by Sir Richard and Virgin's visionary investment in a new future for space transportation".

SpaceShipTwo will be unveiled after darkness has fallen over the Mojave Desert to the sound of a space-themed anthem from Britain's biggest DJs, Above & Beyond. Fittingly titled "Buzz" the track will sample Buzz Aldrin's original moon landing dialogue. Following the naming by Governors Richardson and Schwarzenegger, the DJs will also perform an exclusive set at the celebration cocktail party which will follow and feature the first ever IceBar in the desert hosted by Absolut and the world famous Swedish IceHotel. All the guests will be protected from the desert cold by designer space jackets supplied by PUMA. Finally, to close off the celebrations, all the guests will have the opportunity to view the stunning night skies using specialist telescopes supplied by Ron Dantowitz of the Clay Observatory whose unique tracking cameras followed SS1 into space during the epic flights of 2004.

For further information go to www.virgingalactic.com
Posted by rodeime