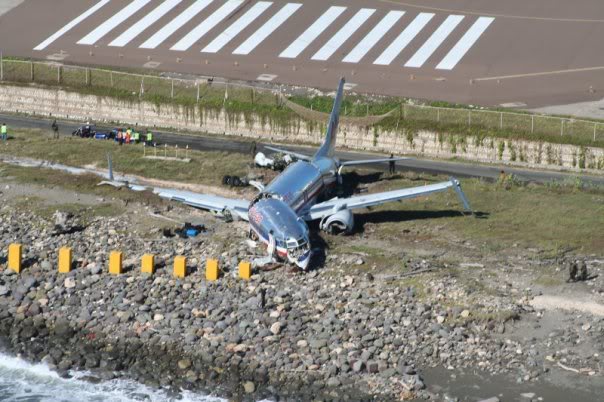 The flight just wound up 10 – 15 feet from the Caribbean Sea. Jamaican capital is facing heavy rain, and it is believe that rain did this damage.

More than forty people sustained minor injuries like cut and bruises, they are all admitted to Kingston hospital. Information Minister Daryl Vaz has denied any life threatening injuries.

Meanwhile American Airlines official have denied the report which said that airplane was broken into pieces.

But officials have said that fuselage is cracked and one side of landing gear is damaged. Tim Smith, a Fort Worth-based American spokesman said that "both engines were removed or taken off the wing as it happened,"

A passenger Natalie Morales said "When we landed it was pouring rain. It literally was like being in a car accident... There was smoke and debris everywhere."

National Transportation Safety Board will work with the Federal Aviation Administration and Jamaican authorities to find the cause of the accident.
Posted by rodeime