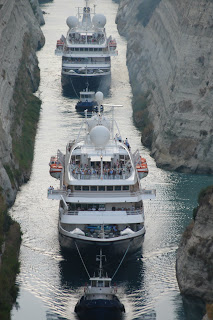 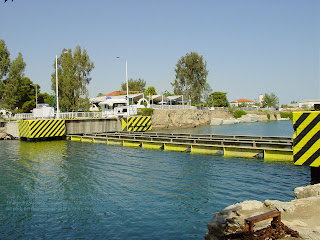 HOODWINKING those whose support they need to keep them in power has been around since the politicians first breathed air.

Way back in 67AD when Emperor Nero sensed wealthy traders and shipowners were getting a bit toey, he made a grand promise with a flair of showmanship that would leave pollies of today floundering.

The fact that fulfilment of that promise would not come about until hundreds of years later – in 1893 – was neither here nor there.

From as early as 700BC, Mediterranean traders cursed an area of Greece known as the Peloponnese, a peninsula in the south of the country's mainland that divided the Adriatic Sea from the Agean.

For while the 16,000 square kilometre peninsula was one of the country's richest and most valuable agricultural areas, it added 300kms – and often days sailing around the infamously unpredictable Cape Maleas – to the lucrative trade routes between the two Seas.

Many early rulers thought about digging a canal across the peninsula, but none was quite game enough to try it, for two reasons: they believed that Poseidon, the God of the Sea, opposed the joining of the two Seas, and if they dug the canal, Poseidon would allow the "higher" Adriatic to rush through like water down a plug-hole, and flood the "lower" Aegean.

Periander, the Tyrant of Corinth, in 602BC temporarily got around the problem with a stone roadway, having ships hauled out of the Adriatic or Agean, placed on wheeled carts and pulled by horses and slaves across the 6km- wide peninsula.

Because of their weight, cargoes were removed and carried separately, and the ships re-loaded and re-launched into the sea on the other side of the Peloponnese. It ended-up as time-consuming and costly as sailing around the Peninsula.

So in 67AD Emperor Nero, with those traders and shipowners making clamouring sounds about his leadership, decided on a grand canal across the Peloponnese Peninsula.

But he didn't announce it with just a simple court statement and the equivalent of today's Press Release. Rather he waited for the approaching Isthmian Games when he knew he would have an audience of thousands – including his business protagonists.

The Games were held both in the year before and the year after the Olympics, and with a massive audience Nero not only declared that he would have a canal cut across the Peloponnese Peninsula – with great ceremony he produced a golden spade, led his noblemen and business moguls to the site of his would-be canal, and dug the first sods of soil himself.

And not content with that, he then loaded this spoil into wicker baskets which he carried on his back and dumped with equal ceremony before no less than 6,000 slaves he'd recruited to dig the canal.

But that was as far as it got: although his plans were for a canal 6.3km long, 25m wide and with an 8m depth of water, it also meant first creating a cutting up to 80m deep just to get down to the water-level of what would be his actual canal.

And to complicate matters, 3-months later Nero – whose increasingly-odd behaviour included giving 3-hour performances on his lyre to audiences in theatres whose doors were locked so no-one could leave before he'd finished –  committed suicide. What little work was done on the canal was abandoned.

It took centuries for the Greek government to get serious again, and finally in 1890 construction began on a canal at a place called the Isthmus of Corinth.

It took three years, including building two road bridges and a rail bridge across the canal, and remarkably at each end, roads on pontoons that "sank" into trenches dug a further several metres into the bed of the canal to allow ships to pass over them.

Today the narrow and shallow Corinth Canal is still a vital link for smaller cargo vessels, boutique-sized cruise ships and pleasure boats seeking a short-cut between the Adriatic and Agean Seas.

For information about holidaying on the Peloponnese phone Travel Creations 1300 550 727… they know all about it as the owner's family hails from there!


[] TIGHT fit: only boutique cruise ships like SeaDream I and SeaDream II here can squeeze through the 25m wide Corinth Canal.

[] ROAD and rail bridges cross the Canal at various points of its 6.3km length.

[] AERIAL view showing how the Canal dissects the Isthmus of Corinth.

[] NOW you see it, now you don't… low-level road bridge "sinks" into the canal to allow ships in and out of the Canal