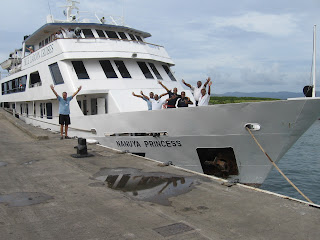 The final voyage brings the curtain down on an illustrious career which has seen the 36-berth, 49-metre vessel operate 2,400 cruises in Fiji's north-western islands carrying more than 85,000 passengers – most of them Australians and New Zealanders – in the process.

Blue Lagoon Cruises' CEO Tim Stonhill (pictured left) was on the dock to welcome the 'old lady', passengers and crew home for the last time on 30 March.

Mr Stonhill said the decision to retire the vessel is part of a bigger picture plan which will see the boutique cruise specialist consolidate its 'Club' and 'Gold Club' product line to offer just one generic cruise product from next month.

Mr Stonhill said the MV Nanuya Princess would now be offered for sale.