BERLIN'S BEST AND ITS WURST 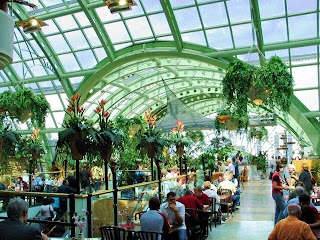 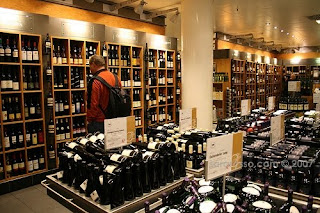 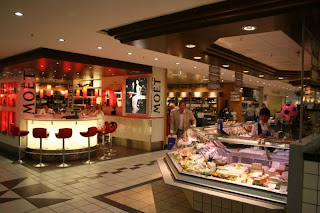 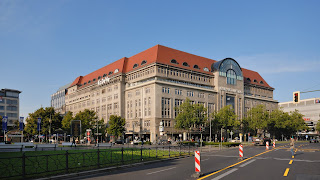 THE rain is pelting down, so much so that from inside our coach it's difficult to identify much out of what our guide is talking about.

And any idea, she suggests, of photos or look-sees is probably out of the question. Until she points out the KaDeWe (pronounced Car De Vay) department store. "Its Berlin's second most-visited attraction," she tells us.

After a brief hunkering-down between guide and driver we're dropped off at KaDeWe's front door, not expecting the treat that awaits: it is now near lunchtime and we are entering a store with one of the biggest and best food halls in the world.

But food is not on everyone's mind: the women in our group rush to the four floors of fashions, mostly as-yet unseen back home.

For the men it's the Food Hall's Champagne and Oyster Bar. Business is already brisk and we pull out the camera. Nein! A store staffer makes it abundantly clear that photography is strictly verboten – leaving us to wonder if this is one of Berlin's few "tourist attractions" that's off-limits to photographers?

Another glass of bubbly eases our frustration, and starry-eyed we head off into the labyrinth of gourmet stalls and stands, kilometres of delicatessen counters, wine shelves that fade into infinity…

KaDeWe is the second largest department store in Europe, trumped only by London's Harrods. And everything here is undertaken in gargantuan scale across seven floors covering 60,000 square metres – including the equivalent of two football fields of purely food and drink.

Every day 40,000 shoppers migrate here to snap up some of the 3-million items representing 34,000 different products.

Like a bottle of wine at home tonight? Browse the shelves' 3,400 bottles from around the world. Some cheese to go with it? Decide from over 1,300 types and varieties (and 1,400 breads and pastries to complete your snack.)

We drool our way through all this, finding at every turn an opportunity for another glass or three and a bite: Chablis or Syrah and oysters, Champagne or Chianti and lobster medallions, a stein of beer and sausage...

Adolf Jandorf conceived all this seeming largesse and opened his vast Aladdin's Cave in March 1907.

He sold out in 1927 and the new owners added another couple of floors, but in 1943 an Allied bomber shot down over Berlin crashed into the store, demolishing most of it; it re-opened partially in 1950, and fully six years later.

KaDeWe (it means "Kaufhaus des Westens" or "Department Store of the West") was further expanded in the 1970s and in 1996 another floor and the glass-domed roof-top Winter Garden Restaurant were added.

You can buy almost anything you want here from the world's best luxury-label toiletries and leather-goods to men's and women's fashions, children's clothing, health products, and food and wine.

And have your hair done, a facial, a spa treatment, furnish the house, fit out the kitchen with every gadget known to man, dine in the Winter Garden restaurant or a plethora of cafés, coffee shops and bars – and buy travel tickets to continue your European journey.

Or graze through free offering: morsels of sausages, chocolates, cookies, and cold meats were amongst products being sampled during our visit.

We could have also bought seafood live from the tank, tropical fruits (including ginger, pineapples and mangoes from Australia,) a couple of hundred varieties of sausages ("the best of the world's wurst, " someone cracks,) pasta, exotic vegetables from every corner of the globe, delicatessen items by the farm-load with names we've never heard of, teas and coffees…

KaDeWe is all about style, and for bragging rights back home we snap-up a stylish box of KaDeWe's own-label tea from which we will grandly offer visitors a cuppa in our meagre kitchen.

KaDeWe is not usually included in Berlin sightseeing tours; you do it in your own time after the Brandenburg Gate, Reichstag, Bellevue Palace, Kaiser-Wilhelm-Memorial Church, City Hall and Boulevard Unter den Linden.

Tempo Holidays has three-day Taste of Berlin packages from $415 per person twin share that include hotel, breakfasts, private arrival transfer and a Big Berlin sightseeing tour.

[] MOET and Mozzarella: one of the many corners in KaDeWe's deli that help put a bit of sparkle into the weekly shopping

[] BETWEEN them the store's wine outlets have some 3,400 bottles from around the world on their shelves

[] DINE under glass in the domed roof-tope Winter Garden