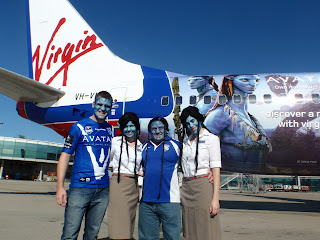 The highest grossing film of all time, AVATAR will be available on Blu-ray and DVD on April 29, 2010 in Australia.  To mark the release of the record breaking film, Twentieth Century Fox has aligned with Virgin Blue to fly AVATAR into the hands and homes of Australians nationwide.

There are many strands to this strategic corporate partnership that aim to raise awareness of the release of AVATAR, led by a unique PR stunt, which is taking place on the day of the AVATAR DVD and Blu-Ray launch, 29 April 2010.

This activity will reveal a Virgin Blue Boeing 737 transformed into an Avatar inspired jet. 20 lucky AVATAR enthusiasts who won competitions around the country will be the first to fly in the jet from Brisbane to Sydney. The winners will be accompanied by Virgin Blue Crew, Virgin Blue VIPs, 20th Century Fox VIPs and media.

To ensure that the experience remains AVATAR inspired, the 20 competition winners and members of the Virgin Blue crew will be made-up prior to the flight to look like their very own Na'vi AVATAR for this once in a lifetime opportunity.

Once the Virgin Blue Boeing 737 has landed in Sydney a unique photo shoot opportunity for media will take place with four Na'vi-inspired actors and the plane.

Kristen McGrath, Associate Director of Publicity and Promotions for Twentieth Century Fox Home Entertainment comments: "It seems only appropriate that the launch of the highest grossing film of all time in Australia should be marked with such a unique event. To partner with Virgin Blue, an airline that is renowned for pushing the boundaries, to recreate the amazing aesthetics of the film during the stunt only further reinforces the creativity of the film. The launch of AVATAR on DVD and Blu-ray allows fans to return to the world of Avatar in the comfort of their own home as the land of Pandora comes alive in their living rooms"

The strategic campaign between Virgin Blue and Twentieth Century Fox will also include:

The partnership will be promoted to consumers with an in-flight commercial running on aircraft for one month on Virgin Blue's Voyeur channel.

To reinforce the commitment to consumer engagement in the partnership, Virgin Blue is offering competition entrants the chance to win one of five exclusive VIP AVATAR Experiences in LA.  Details of the competition are at www.virginblue.com.au/avatar.

Heather Jeffery, Virgin Blue General Manager of PR & Communications comments: "We're very particular about who and what appears on the exterior of our aircraft, last year our Black Eyed Peas jet was hugely popular and this year we're thrilled to be part of the continuing excitement about AVATAR."

"This is a broad ranging promotional partnership and our team are having great fun with it.  Twentieth Century Fox's AVATAR is a ground-breaking film that pushes the boundaries and at Virgin, we can certainly relate to that."

"This is the start of the partnership with the epic film as we offer our loyal Guests exclusive opportunities to engage and enjoy the movie."

The must-own AVATAR Blu-ray release provides the ultimate high definition experience ever for home viewing audiences.  Recognized for its optimum picture and sound, the film's masterful cinematography, art direction and visual effects lends itself to awe-inspiring clarity when viewed on Blu-ray Disc.

Oscar and Golden Globe® winning epic is the highest grossing film of all time, taking in over $2.7 billion (US) in worldwide box office with over $1.9 billion (US) derived from international markets. Director James Cameron takes audiences to a spectacular world beyond imagination, where a reluctant hero embarks on a journey of redemption and discovery as he leads a heroic battle to save a civilization.
Posted by rodeime