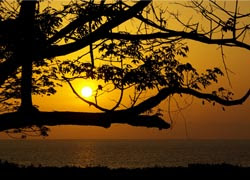 As river cruising fades — at least temporarily — from most of North America, it is beginning to open up in more exotic destinations, including Vietnam and Cambodia with Ama Waterways and now in West Africa with Variety Cruises. And, although Variety is not traditionally thought of as a river cruise line, its intimate ships are well suited to river cruising.

The new itinerary fits in well with Variety’s mission to operate “unforgettable seven-day cruise programs to amazing destinations,” which have generally taken place in the Greek Isles, the Northern Mediterranean and the Red Sea. Now, however, the company is moving into Africa’s rivers.

Variety is offering the new Africa river cruises aboard the 46-passenger mega-yacht Pegasus, which is being fully refurbished. The twin-hulled catamaran has an elegant dining room, an open-air restaurant under a white stretched canvas roof, a homelike main lounge and air-conditioned staterooms with safes and a satellite television.

Aimed at veteran travelers who want to go beyond the usual destinations to experience exotic cultures, the Rivers of West Africa cruise departs on Fridays and sails roundtrip from Dakar, Senegal. The first port of call along the Saloun River is Djiffere, from which passengers have the opportunity to explore the village of Joal Fadiout, a fishing community on the mainland built entirely of shells from a nearby island.

The cruise continues along the Gambia River to Tendaba, home to Kiang West National Park and the Baobolong Reserve, a paradise for birdwatchers. Kuntaur, a thriving port village with bustling markets on the Gambia River, is important to Gambia’s main crop export, peanuts.

Guests will also visit Janjangbureh, the location of the River Gambia National Park, a conservation sanctuary for chimpanzees, hippopotamuses, Nile crocodiles and many bird species. Banjul, the capital city of Gambia on St. Mary’s Island (Banjul Island), where the Gambia River enters the Atlantic Ocean, is another port of call, and here, guests can visit the nearby the Nature Reserves of Abuko and Makasutu.

Optional pre- or post-cruise land extensions include seven days in Mali and its colorful city of Timbuktu. Variety’s eight-day West Africa itinerary is offered Dec. 17 through March 18 with fares starting at $2,490.