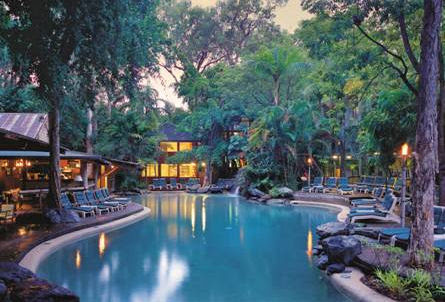 Despite the widespread disappointment and cynicism at the deferral of the promised Jetstar direct flights to Japan, Accor is demonstrating its confidence in the Cairns/Port Douglas region’s recovery by investing millions of dollars in key properties.

Two new properties to join the Accor family include the landmark Oasis Resort on Lake Street and one of the region’s best known properties, Treetops in Port Douglas. Both properties had fallen into decline and required substantial modernization and refurbishment.

Accor Vice President Australia, Simon McGrath, said in a recent press statement that the addition of Mercure Port Douglas Treetops was a significant milestone for Accor and the Australian hotel industry.

“The addition of Treetops marks a very special occasion for Accor as it will take our Australian network to over 20,000 rooms – the first hotel group to achieve such a mark in Australia.

“Not only will the hotel benefit from our partnership, but it will bring Port Douglas to an even wider audience. The destination achieved a very high-profile in recent decades, and we will use our vast distribution channels to revitalise interest in what is one of the world’s most attractive destinations.”

The 224-room resort is located a short walk from Four Mile Beach and is five minutes drive to the centre of Port Douglas village (a shuttle bus service operates throughout the day).

Over the past six months, the hotel has received an extensive, multimillion dollar renovation, including upgrading of rooms, the restaurant and public areas and a fresh new paint scheme throughout the resort.

“The Oasis was one of those typical ‘80s ‘tropical’ resorts needing lots of TLC,” said director of sales, Philip Newland, “and now we have a totally new look ... much more contemporary. The previous AAA 4-star rating was generous, now we are a confident 4.5 rated property.”

Just down the road and occupying the prime location adjacent Cairns’s Trinity Wharf, is the Pullman Reef Casino. Newly-installed GM, Adrian Williams, relishes his new post and strongly believes 2009 represents the bottom of the current cycle.

“Like many destinations reliant on tourism and corporate travellers, Cairns has been responsive to the difficult GFC period and demonstrated new adaptability and innovation.”

$4.5 million has been spent on the property up to May this year in a continual process of upgrading rather than a debilitating refurbishment.

Despite Williams’s disappointment at the deferral of the Jetstar flights, he considers this a minor hiccup that “provides tourism operators, marketers and travel agents with a better lead time in which to properly prepare a strategy to sell on the back of the forthcoming Osaka services.”

Bridget Catterall, General Manager of the Best Management Group, who are contracted to manage the Treetops Resort & Spa under the Mercure franchise contract sums up the climate:

“Travel to Australia and Cairns has never been cheaper, and with Port Douglas boasting such a high profile in the American, European and Australian markets, we believe there is great potential to grow our business substantially over the next few years.”
Posted by rodeime