PICTURESQUE RAIL LINE A STAB IN THE DARK 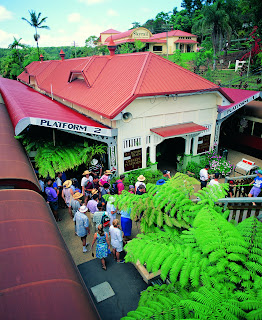 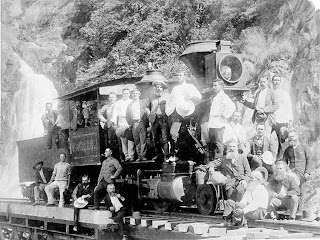 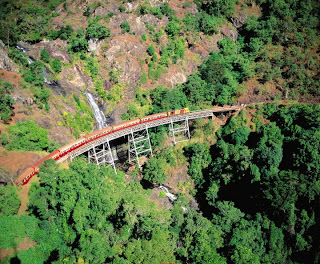 JOHN Robb knew how to turn a quid, and when the Queensland government couldn't get anyone to finish a railway line from the mosquito-ridden port of Cairns to the wealthy, but remote, farmlands and mining areas "up the range" behind town, he decided in his largesse to come to their aid.

It was the 1880s and Mr Robb dictated a telegram to his secretary proposing to Queensland that he complete the rail line. When it came to a price, Mr Robb sucked on his pencil for a moment, and decided on 290,155 pounds ($580,300.)

It was a stab in the dark, but a healthy one, and Mr Robb was not the least concerned that he had no idea of the area through which the rail line would run, how many bridges, culverts and tunnels may be required, nor that anyone in his Melbourne civil engineering company had ever been to Cairns.

But he knew that the Queensland government was desperate to complete the line at any cost, and a couple of weeks later he was invited to build Stage Two of the Cairns-Kuranda rail line. Four years later when the job was completed, he revealed to colleagues that he'd turned a profit of $250,000 – an absolute fortune in 1891.

But Mr Robb soon learnt why two previous contractors had gone bankrupt building Stage One of the line, leaving the government to complete that stage itself at enormous cost.

Queensland desperately needed the 75km-long Kuranda line. The country around the developing little tablelands settlement abounded with rich pastoral land, tin and some gold, and huge timber reserves that were there for the taking.

But it was virtually cut off from the outside world, and when the pastoralists, miners and timber-getters were deemed to be on the verge of famine, the government finally decided to act. Roads were out of the question, and rail the only apparent solution.

John Robb recruited 1500 labourers, and although he'd included the cost of buying their tools in his contract, told them that if they wanted a job they would have to provide their own picks and shovels. He was making a profit before work even began.

And with just these hand tools, wheel carts, buckets, dynamite and muscle power, Mr Robb and his men removed an astonishing 2,300,000 cubic metres of rainforest mountainside, dug 15 tunnels through rock and earth (one has three opposite curves snaking around the contour of the mountain,) constructed 40 bridges and culverts, and laid 34km of track.

And staved-off aggressive Aborigines who objected to the railway running through their tribal lands.

When one tunnel slid down the mountainside in a tropical downpour, Mr Robb simply told his surveyor to amend the plans. "Put bridge, not tunnel," he grunted.  In other downpours – up to 1800mm (nearly 6ft) in 72-hours – workers watched great sections of track slide hundreds of metres into valleys below, then dug deeper into the 75-degree mountainside to lay new track.

Labourers were paid the equivalent of 80c a day. After they went on strike, Mr Robb agreed to pay them 85c a day.

A spectacular curved steel trestle named Stoney Creek Bridge is said today to be the most photographed bridge in Australia outside of Sydney, and it was on this that Queensland Governor Sir Henry Wiley Norman, who revelled in public acclaim, decided he would officially declare the completed line open.

A grand banquet was prepared on the bridge for scores of local dignitaries, and Mr Robb and his senior staff.

But alas Sir Henry's well-researched speech was never heard: The waterfall behind the bridge was in flood and the sound so deafening that no one could hear a word from the official dais. When asked why he'd not advised of the flood John Robb, who had little time for bureaucracy, said: "No one asked me."

History says that it was a very well fed and very drunk official party that returned to Cairns that night. All, that is, except a despondent Sir Henry.

Ask travel agents to book you on the 1.5hr trip up the rainforest mountain on the Kuranda Railway, and back down to Cairns on the Skyrail cableway when making Cairns holiday reservations – it'll prove a day you'll long remember.

[] PICTURE-perfect, the most-photographed railway bridge in Australia is the Stoney Creek trestle on the Kuranda Rail line.

[] JOHN Robb and some of his 1500-strong team who built the daunting Kuranda Rail line by hand.

[] PICTURESQUE Kuranda Railway Station; take the train the 75km up the Range, and the Skyrail cableway back to Cairns.