Cruise Weekly: Romance on the Reef 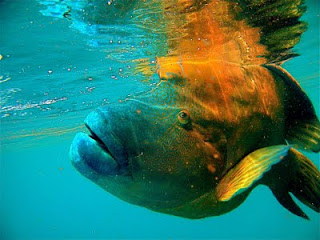 Location Thetford Reef; 16 deg 48.2S, 146 deg 10.3E
"Where's Wally?" That was the question on everybody's lips. Wally, in case you were wondering, is the 100kg Giant Hump-Headed Maori Wrasse who inhabits Thetford Reef, Coral Princess II's first stop out of Cairns on her southward exploration of the Great Barrier Reef. "He looks nasty," says Vanessa, our ebullient marine biologist guide, "but he's really a big sook. Right now it's mating season and he's almost certainly off chasing lady Wrasses."
Coral Princess Cruises, established in 1984 by Tony and Vicki Briggs, are certainly the longest operating Australian adventure cruise company and, according to Tony, the first. They've come a long way since their first vessel, a Fairmile-class former submarine chaser, first began overnight reef safaris for adventurous guests. It was a bold move, but one that certainly paid off. CPCs now operate three vessels within a territory that includes Papua New Guinea, the Kimberley, Melanesia and New Zealand. Their flagship, the 72-pax 65m Oceanic Discoverer, was launched in 2005, just in time to join True North II and Orion in the exploding local expedition cruise scene.
Our itinerary, 3 nights to Townsville, is a leisurely exploration of the outer reefs with plenty of snorkelling and scuba diving for beginners and certified divers alike. Vanessa, literally overflowing with information, crams as much biological information as we can handle. Our wonderful reef is a mind-boggling organism, 2400 kms long, stretching from Bundaberg to PNG. The variety and complexity of vivid and colourful life is beyond the comprehension of most, including me. While some believe our reef is dying in the warming planet others, like Vanessa, are more optimistic.
The itinerary is broken with a resort stop at Dunk Island and a beach BBQ at Pelorus, CPC's private island just north of Townsville. This cruise is carrying thirty passengers from as far afield as the UK, Spain, Switzerland, Austria, France and the USA indicating there is more interest in a our reef from overseas than locally. Our vessel, Coral Princess II, is a 25-y-o, 48 pax catarmaran now exclusively operating the the two GBR itineraries. She is joined by Coral Princess over summer, when not on Kimberley duty with Oceanic Discoverer. CPCs offer three GBR itineraries; 3 nights to Townsville, 4 nights Cairns to Cairns via Lizard Island and Cooktown and 7 nights with the two butted together. My personal choice is the 4 night, northern sector for variety and a little extra land-based activity.
While lusty Wally remains elusive, there are plenty of other exciting discoveries like the two massive Coral Trout in the throws of passion, a fish feeding frenzy with giant trevally, a spectacular but solitary Lion Fish, serene turtles, elegant rays and chipper little Nemos (anemone fish). If love is an indicator, then our reef is alive and well.
Fares begin at A$1496 (twin share) for the 3-night cruise. Coral Princess Cruises: www.coralprincess.com.au 1800 079 545

Image:: Wally comes by for a visit. (c) Vanessa Marshall