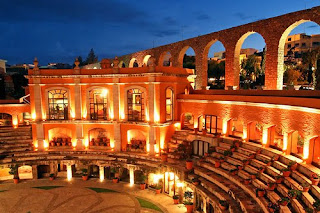 IN his continuing search for the more weird, whacky and wondrous in the world of travel, DAVID ELLIS says you can lay in bed in one of the world's most unusual hotels and imagine the crowd as it roars "Olé, Olé!", and in your mind's eye picture dark-haired beauties tossing blood-red roses to their matador heroes in what was once one of Mexico's most famous bull-fighting arenas…

Because the Hotel Quinta Real Zacatecas has been built into the grandstands of the old San Pedro bull ring, a spectacular 19th century Spanish-style structure that saw its last encounter between man and beast in 1975.

Guest rooms have balconies overlooking the original ring that's now paved with cobblestones sprinkled with vast pots of flowering plants, and there's a restaurant and bar at ground level on the very edge of the ring itself.

If you are interested in a stay, have a look at www.quintareal.com