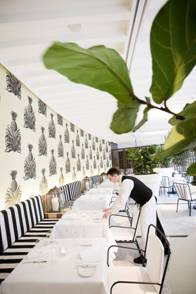 Television's Melbourne-based MasterChef judge Gary Mehigan can be forgiven for succumbing to a familiar French feeling when he arrives at Sofitel Sydney Wentworth next month.

The Masterchef – who in a past life worked as a chef at Sofitel in Melbourne – will return to his five-star hotel roots and the Sofitel Luxury Hotels brand to headline a celebrity chef lunch which will take place at sister hotel the Sofitel Sydney Wentworth's Garden Court restaurant on Thursday 15 July.

Prior to finding fame for his television appearances and two award-winning restaurants, Fenix and Maribyrnong Boathouse, Mehigan worked at the Sofitel Melbourne On Collins, where coincidentally he mentored his then apprentice and current MasterChef cohort, George Colombaris.

Sofitel's Celebrity Chef Lunch with Gary Mehigan at Garden Court will be held on Thursday July 15 from 12 noon at the Sofitel Sydney Wentworth.

The luncheon offers an opportunity for food lovers to get up close and personal with their favourite MasterChef while being re-introduced to the new menu and offerings available at Sofitel's flagship restaurant, Garden Court.

After enjoying complimentary canapés and drinks on arrival, guests will be treated to a special three course menu designed by Gary Mehigan for the exclusive lunch event at Garden Court, concluding with a live cooking display showcasing the dessert de jour. He will be assisted on the day by Garden Court restaurant's Chef de Cuisine Vincent Girardin.

Sofitel Sydney Wentworth's magnificent restaurant Garden Court brings together an international team with classic French technique and experience. Curved around the hotel's semi-circular rooftop garden, the fifth-floor restaurant has been designed in the style of an urban conservatory, with a striking modern dining room overlooking the hotel's rooftop courtyard, an open kitchen and a stylish room for private dining.

The cost of the lunch event is A$150 per person. Following his appearance at the Sofitel Gary Mehigan will be hosting master classes in Sydney as part of the annual Sydney Good Food & Wine Festival (16-18 July).

For more information visit www.sofitelsydney.com.au or call 02 9228 9179 to make a reservation.

With his award-winning establishments, Fenix and Maribyrnong Boathouse, among some of the finest dining experiences in Melbourne, Gary's credentials command attention.

His natural leadership qualities came to the fore in Season One of MasterChef Australia, and this year Mehigan is back to put a whole new horde of cooking hopefuls to the test.

Having received training in world class restaurants, including The Connaught and Le Souffle in London in his early years, Gary has been based in Melbourne since 1991. He has headed the kitchen in some of the city's most prominent restaurants, including Browns, Burnham Beeches Country House and the Sofitel Melbourne On Collins before opening the award-winning Fenix in 2000.

Before MasterChef last year, Mehigan was teaching Australians to cook through the LifeStyle Channel's Boy's Weekend and Good Chef Bad Chef, and just recently crossed over to print with his cookbook Gary Mehigan's Comfort Food.