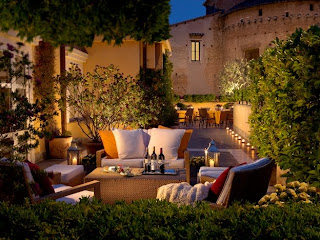 Like the other great cities of Europe and America, Rome finally has its own Gay Street. For the last year, the bars and restaurants of Viale San Giovanni in Laterano, in the Celio district, just a short walk from the most famous monument in Rome, the Colosseum, have become a meeting point for the homosexual community and other night birds from around the world. As it waits to become a completely pedestrian zone, the entire district is now a very popular attraction for tourists and diehard party people.

Just a short walk away from here is the exclusive Hotel Capo d'Africa, a cool, elegant hotel that could also be called an "art house" due to its collection of works by contemporary artists and the fact that it is frequented by well-known writers and musicians. The hotel has a roof terrace with a wonderful view over the city which contains the history that has made Rome great and famous throughout the world: the Forum, the Domus Aurea, the Arch of Titus and a hundred other fascinating remains bearing witness to the city's greatness and glory.

The various bars and clubs in Viale Laterano and the intriguing lanes and alleys that lead off from it set Roman nights buzzing. One of the newest bars, Bar Eleven (Via San Giovanni in Laterano 196) comes straight from London creating a Soho corner in the centre of Rome. This trendy, psychedelic atmosphere which lightens up the dark with lights, colours, sounds and flavours is an experience not to be missed! There are three room choices all play soft soothing music which goes hand in hand with the colours of the rooms. This bar also has unique drink choices such as: new and explosive cocktails or fine wines. Tuesday to Sunday, from seven in the evening until two in the morning there is a never-ending range of aperitifs, barman acrobatics and surprises.

But the best known nightclub has an explicit name: Coming Out (Via San Giovanni in Laterano 8). From nine in the evening onwards, the pavement outside the ruins in Via San Giovanni in Laterano transform into parade. While completely renovated, the city's Gay Bar maintains a warm welcome and its linear look gives it a more New York style. The kitchen has been transformed and is ready to serve an excellent steak after an elaborate pasta course, finishing off with irresistible desserts and as many treats as you like. There are also many novelties in the weekly programme which will be under the artistic direction of Tekemaia. The bar is open every day from 10 in the morning until 2 a.m.!

In the Summer, the Roman evenings at "Gay Village" will be buzzing with life. Icons of the Italian pop music scene will take turns on stage with artists and DJs of international fame such as: Tocadisco, Offer Nissim, Satoshi Tomiie, Hector Fonseca, and Enrico Arghentini. Last year audiences of over 100,000 people embraced the concept of Stile Libero, consolidating the great success that has been repeated in Rome for the last eight years.

The Hotel Capo d'Africa
The name is reminiscent of exotic places, but Hotel Capo d'Africa is much more than that. Its extensive collection of works by Rome artists, for example, means that it can call itself a genuine contemporary art house. The paintings are skilfully displayed and blend well with the modern, exclusive interior design. The Hotel Capo d'Africa is also linked to cultural events in the city, such as the Massenzio Literature  Festival and the Villa Celimontana Jazz Festival.

The Hotel Capo d'Africa is offering a "Friendly Rome" package, starting from 430.00 euros a night. This includes: Unique Studio Suite, champagne breakfast in room; perfumed bath salts and candles in the bathroom, and one night's free Pay TV. This promotion can only be booked through the hotel's reservations office (tel. 06/594848, fax 06/32111478, e-mail: info@hotelcapodafrica.com).

Suspended over the roofs and treasures of Rome
The Hotel Capo d'Africa is in an early twentieth century building in the Celio district, a short walk from the Colosseum and from Via San Giovanni in Laterano. All around it is the history that has made Rome great and famous around the world: the Forum, the Domus Aurea, the Arch of Titus and a hundred other fascinating remains bearing witness to the greatness and splendour of Rome.
The hotel with its beautifully kept rooms, boasts some of the most exclusive views in the city.
The terrace of the "Unique Studio Suite", included in the "Friendly Rome" package, overlooks the apse of the Basilica dei Santi Quattro Coronati, which houses an important cycle of late thirteenth century frescoes. The view of the Colosseum is so breathtakingly close, that it is almost hard to believe!