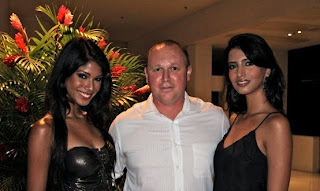 The already enchanting view from the Sofitel Fiji Resort & Spa was that much more spectacular earlier this month (7-12 June), when the top three winners of the "Miss India Pageant 2010" stayed at the hotel as part of their recent tour of Fiji.

Sofitel's General Manager Adam Laker was on hand to roll out the red carpet for the winners including Miss India who has automatically qualified to compete in billionaire Donald Trump's famous Miss World/Universe competition taking place in Las Vegas in late June.

Inbound Operator Tour Managers teamed up with Tourism Fiji and Air Pacific to bring the beauties to the equally enchanting Fiji Islands for a publicity tour and calendar shoot.

The Fiji trip was covered by both local and Indian press including The Times of India newspapers, Sony TV, Zoom TV and Radio Mirchi- Iindia.

A special itinerary was created for the photo shoot, including Sofitel's luxurious lagoon and water activities in Nadi Bay sponsored by onsite operator Adrenalin Watersports. Nearby Denarau Marina and day excursions to the nearby Mamanuca Islands were also organised for the group to showcase destination Fiji.

As Denarau's most sophisticated international resort, the Sofitel blends traditional French influences that are the hallmark of the Sofitel Luxury Hotels brand with more exotic Fijian charms to offer a choice of modern facilities that extend to a Mandara Day Spa retreat, the world's first Pure Fiji concept store, the Turtle Club for kids, plus an impressive line up of award winning restaurants, bars and new sidewalk café La Parisienne.