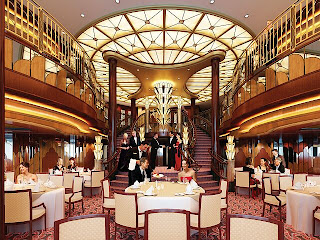 A 24-night cruise from Los Angeles to Sydney aboard the very grand Queen Elizabeth in January and February next year is selling through ecruising.travel from just $7359pp twin-share – almost sixty per cent below originally advertised, and including air and taxes from Sydney, a night at the Beverly Hilton Hotel with airport/hotel/ship transfers, and up to US$750* in free onboard spending credits.

And if you've sailed on Queen Elizabeth previously, the price reduces even further to as low as $6819pp.

The 5-star Queen Elizabeth sails from Los Angeles on January 29 2011 for Lahaina and Honolulu in Hawaii, Apia and Pago Pago in Samoa, Port Denarau (Fiji,) New Zealand's Bay of Islands, Auckland and Wellington, and Sydney.

Gourmet dining in a choice of venues or complimentary 24-hour room service, world-class live-stage entertainment, screenings of late release and classic movies, dance classes, Country House Soirees – even Garden Parties are all included in the price.

There are also onboard educational programme with guest lecturers, a children's programme with indoor and outdoor facilities for 1-12 year olds, a library with over 6000 titles and a Cunard Royal Spa and Fitness Centre.

For full details phone 1300 369 848 or visit www.ecruising.travel.  *The onboard spending credit varies with cabin and stateroom categories; US$750 is the maximum per stateroom. Ask ecruising.travel for details.