Cruise Weekly: Aboard the MV Charaideo 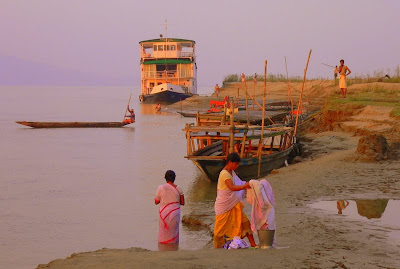 Tea and Tigers on the Brahmaputra

It wasn't an auspicious start. We were on the front page of one of the national Indian dailies even before we'd boarded the vessel. The famous Brahmaputra River (it's okay, I had to look it up too) runs from Tibet, through Assam and Calcutta into the Bay of Bengal. Late monsoonal rain had artificially swollen the river and as the level rapidly fell our vessel, the charming MV Charaidew, began to settle on the sandy bottom while waiting for us to arrive. All through the night, two burly little river tugs strained to free us from our plight and by breakfast we were away. Apart from some lost sleep and a few red faces, their was little interruption to our journey.

The Assam-Bengal Navigation Company (ABN) was formed in 2002 as an Indo-British joint venture company by long time UK travel operator, Andrew Brock, and local tea magnate, Ashish Phookan. The company now operates two vessels, the restored MV Charaidew (38m, 24 pax) and the new build, Sukapha, on Indian Rivers including the Brahmaputra and Hugli – the latter a 'distributary' of the massive Ganges. Two river lodges adjacent the national parks are also owned by ABN.

If you've been following this column, you'll recall my growing fascination with 'inland cruising' and the massive growth in this market segment. As the ranks of committed river cruisers grow and they've ticked off Danube, Rhine and Amazon, the search for more enriching waterways continues. India is poised to snare a fair slice of this market as operators like ABN, the pre-eminent Indian river cruise operator and newcomer, the SE Asian company Pandaw, work to grow this market.

At time of writing ABN were offering products ranging from three to seven nights incorporating lodge stays and visits to UNESCO World Heritage sites such as Kaziranga NP in the remote Golaghat District of Assam. While tiger and sloth bear sightings are recorded, it's the equally rare Asian rhino (Rhinoceros unicornis) that offers the best chance. Our group made five contacts, including a mother and calf. Elephants, of course, are also high on the list and rides atop these mighty pachyderms are a highlight of your visit. Those in search of birdlife, native culture, religious and colonial history will also be in their respective elements. Assam, as tea-drinkers will quickly attest, produces some of the world's finest brew. The sight of dozens of brightly coloured saris moving slowly among the vast plantation is a scene long-remembered.

Before you pick up the phone to book your Brahmaputra River cruise, please understand that the departure port of Guwahati, the Assam state capital, is a remote town even by Indian standards. There is no mobile roaming in place, ATMs are uncooperative and many traders will only accept Rupees. Your ABN bar tab, for example, can be settled in USD, but not credit card. Any travel in India can be a bit of a chore, especially by road.

Having said that, the cruise component of the ABN product is perfectly charming, wonderfully relaxing and a glorious throwback to the days of the British Raj, when the way of England was the way of the world!