DOING IT IN STYLE – YOU GOTTA BE DREAMING 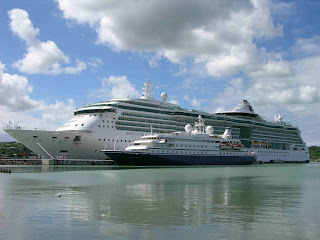 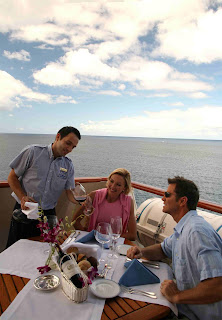 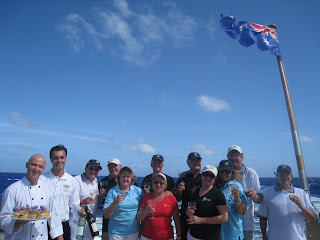 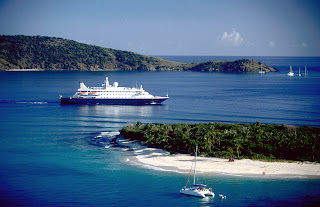 ITS only January and we're already planning on exiting 2010 in style.

Mates remind us, however, that we're mere scribblers, and suggest we're dreaming.

But our dreams are sea-dreams because we're taking ourselves aboard the world's most highly-rated boutique motor-cruiser – SeaDream I – that come October will journey 6,100 leisurely kilometres (3,300 nautical miles) from one side of the Atlantic to the other.

Yet bizarrely the tab for those handful of fellow holidaymakers joining us, will start from just US$2803pp – including government and port taxes – and is a steal at our current high rate against the US$.

And we'll be indulged in 5-star luxury by more crew than passengers (95 crew for probably no more than around 85 or 90 guests,) we'll dine on the finest gourmet fare, take drinks from the bars any time we want and not have to sign chits or worry about a bar bill when we get off, enjoy bottomless glasses of wines at lunch and dinner (and again not have to sign or worry about how much they'll cost,) join our fellow passengers for nightly pre-dinner cocktail gatherings with Champagne and caviar, and not have to concern ourselves with putting aside for those annoying tips.

More amazingly it's not for just a week, but a whole 12-nights as we swan our way from Malaga in Spain to Madeira in Portugal, and across the Atlantic to San Juan in the Caribbean.

If you, too, think we've lost the plot, let us explain. When summer comes to an end in the glitzy Mediterranean, the twin mega-motor-cruisers SeaDream I and SeaDream II chase the yellow ball across the Atlantic for six months in the balmy Caribbean.

And because these "Crossings" don't have the associated costs of daily ports of call, they're priced as much as a half below the norm.

We've done a couple before, and which is why we've put our hand up again for this year*.

SeaDream I and II each have just 56 staterooms, but last year our "Crossing"  was "full" with only 82-guests – including ten Aussies – because some staterooms were occupied by single holidaymakers.

Days started with breakfasts on deck under shade covers, and we quickly found we couldn't get more than a couple of steps from the lavish buffet of fruits, cheeses, yoghurts, juices and cereals, without a waiter whipping our plate from us and delivering it to our table. Saved us all that effort.

And then we'd be presented with menus for "the mains" that could include scrambled eggs topped with truffle oil, corn beef hash, lamb cutlets, hash browns, Traditional English Breakfast of bacon, eggs, chops, tomatoes…

Following this we'd venture to the golf simulator to take-on St Andrews one morning, Pebble Beach another, Princeville a third. And by noon be adjourning for boastful drinks at the outdoor Top of the Yacht bar….

After which we'd retreat to an afternoon lecture, a kip in our stateroom, or take a good book poolside, raising a languid hand on arrival to have a waiter appear almost instantly by our deckchair with our favourite drink. And to mist us with a moisturiser spray – before asking if they could also polish our sunglasses while at it.

Then a shower and change before nightly cocktails… and dinner in the Main Salon (and occasionally on deck too) with such delights as Grand Marnier Soufflé, whole roast prime rib-eye, roast duck with orange, honey and oyster sauce, rack of lamb, vanilla crème brulee with pistachios, Baileys cheese cake…

And there was no call for ties and jackets at dinner: slacks and collared shirts sufficed.

And finally nightcaps at the Piano Bar, before collapsing to our queen bed in preparation to do it all again next day.

If this sounds your kind of holiday – particularly at the price that's for 12-nights and includes 5-star dining and service, wines with lunch and dinner, drinks from the open bars, and gratuities – come and join me.

[] ON deck dining for two on SeaDream I's Atlantic Crossing