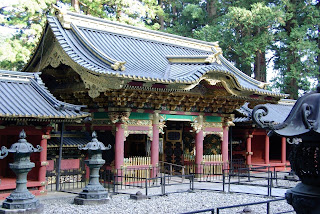 Nikko City - located less than two hours northeast of Tokyo and famous for its World Heritage listed shrines and temples - is offering free walking tours in English every Monday from January 25 through March 29, 2010 to commemorate the tenth anniversary of its World Heritage registration.

The shrines and temples of Nikko are famous across Japan for their elaborate and beautiful architecture, and draw millions of visitors to the city each year.

Rinnoji is Nikko's most important temple having been founded by Shodo Shonin in 766. The temple is home to three large, gold lacquered wooden statues of Buddhist deities.

Toshogu is the mausoleum of famous Edo period shogun, Tokugawa Ieyasu (1542-1616), and is a lavishly decorated shrine complex of Buddhist and Shinto buildings located in a beautiful forest.

Futarasan Jinja is dedicated to the Shinto gods of the three most sacred mountains in Nikko. The shrine is said to bring happiness and marriage to those who visit. Legend has it that the shrine's sacred fountain has water that restores youth.

As the tour does not include guiding inside the temples and shrines, visitors are encouraged to purchase a combined shrine and temple entry pass or a Tobu Railway special discount pass.

The tour starts at 11:00am and takes approximately one hour. No reservation is required and participants are asked to assemble at Shinkyo.