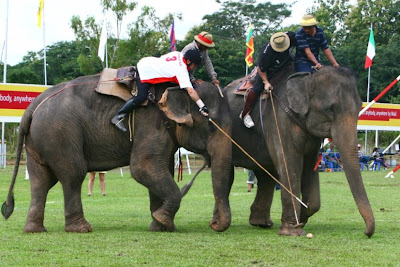 Anantara Hotels, Resorts & Spas has announced the 2010 dates for the King's Cup Elephant Polo Tournament. The highly popular event will take place from March 22 to March 28 in the northernmost region of Thailand known as the Golden Triangle.

This year's event is once again sponsored by Audemars Piguet - one of the world's oldest and most prestigious watchmakers - and will see a number of teams go trunk to trunk to win the coveted King's Cup trophy.

An opening parade and blessing ceremony will be held in Chiang Saen town on the first day of event to showcase the culture of the Golden Triangle region with northern traditional-style dancers, hill-tribe villagers in traditional costume, elephant spirit men (Khru Ba Yai), and colourfully decorated pachyderms. The parade will mark the kick-off of the weeklong competition held on the banks of the Ruak River, which divides Thailand from Burma.

During the first five years of the tournament, the event took place in the Royal seaside town of Hua Hin before moving to the native home of elephants in 2006 – the Golden Triangle. The tournament was introduced to Thailand in 2001 by Anantara Resorts and is a charitable event that raises money for the benefit of all Thailand's elephants.

In just eight years the King's Cup Elephant Polo Tournament has gone from a small two-day event with six teams into a week-long extravaganza, which in 2009 featured 12 teams from four continents, encompassing 40 players from at least 15 countries.

Through its own Elephant Camp located within the grounds of the Anantara Resort Golden Triangle, the property's focus on the future of Thailand's pachyderm population forms an integral part of the resort's operations 0n an ongoing basis. Resident Elephant Camp Director, John Roberts, worked closely with the Thai government's Elephant Conservation Centre in Lampang to develop Anantara's camp as an elephant sanctuary and continues to work with them on several 'big picture' conservation projects.

To date the tournament has raised over US$250,000 for the National Elephant Institute, which provides medical care, sustenance, employment, and mahout training to Thailand's elephant population, this has been distributed as cash, in the form of pick up trucks and a custom built elephant ambulance. In 2009 the funds were used to run the ambulance as well as provide housing at the Centre's elephant hospital allowing it to provide free accommodation as well as medical treatment to any sick elephant in Thailand, these funds also provided a mobile veterinary centrifuge for their mobile elephant clinic. Proceeds from the 2009 project have been used to 'rescue rent' five street elephants to be trained in occupational therapy as part of a joint Thai Elephant Conservation Centre, Chiang Mai University project investigating the benefits of using elephants to treat Autism.

It is estimated that Thailand has around 3,600 domesticated elephants and 1,500 wild elephants. The Tourism Authority of Thailand (TAT) fully endorses the King's Cup Elephant Polo tournament, having identified it as one of the country's prime annual special events. It will take place in the grounds of Anantara Resort Golden Triangle, and spectator entrance is free.

For hundreds of years throughout Thailand, people would leave a jar of water outside their house to provide refreshment and extend a welcome to the passing traveller. Anantara is taken from an ancient Sanskrit word that means 'without end', symbolising this sharing of water and the heartfelt hospitality that lies at the core of every Anantara experience.

Anantara Hotels, Resorts & Spas initially opened in the seaside town of Hua Hin and on Koh Samui in the Gulf of Thailand, and in the Golden Triangle in the country's north. In the world-renowned destination of the Maldives, Anantara Dhigu and Anantara Veli are a 30-minute boat ride from the capital Male.

Anantara Seminyak debuted in April 2008 in the most fashionable district of Bali – the Island of the Gods. Late 2008 saw the opening of Anantara Phuket, situated in the serenity of Mai Khao Beach, Thailand, followed by Desert Islands on Sir Bani Yas Island off the coast of Abu Dhabi, and Anantara Si Kao which lies on the secluded Changlang Beach area south of Krabi, Thailand.

2010 will see a trio of new properties welcoming guests across Asia and the Middle East to further enhance Anantara Hotels, Resorts & Spas' enviable worldwide portfolio.  Anantara Kihavah Villas Maldives is poised for its grand opening in July 2010, to be joined by Anantara Al Madina A'Zarqa in Oman and Anantara Sanya in China towards the end of the year.

Anantara is a member of Global Hotel Alliance (GHA), the world's largest alliance of independent hotel groups. GHA partner hotels are renowned for reflecting and respecting local traditions and culture through their products and services.  www.globalhotelalliance.com
Posted by rodeime