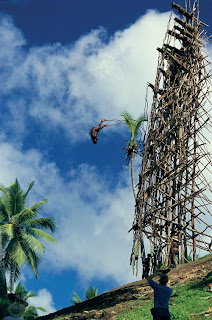 Vanuatu's world famous Pentecost Naghol land diving ritual which has typically only been performed on Saturdays between April and June will now also be held on Wednesdays and Fridays during this period.

Annie Niatu, general manager of the Vanuatu Tourism Office, welcomes the move by the Southern Pentecost Tourism Association, saying it is an important step to boost tourism to Pentecost.

"The Pentecost land diving ritual can only be held from April to June and people come from all over the world to see it.  These extra days will allow a few more fortunate visitors to witness the ritual," Annie said.

"With 83 islands, Vanuatu is one of the most culturally diverse countries on earth. There are a number of fascinating cultural festivals and events throughout the islands and the tourism office aims to make these experiences more accessible for tourists."

As part of the development, Pentecost received a new airport in June 2009 and Air Vanuatu purchased a new ATR 72 aircraft in December which will increase capacity to Vanuatu's outer islands.

Visiting Pentecost Island is one of Vanuatu's most popular authentic cultural events. Men climb to the top of a manmade tower, which can be between 20 – 30 metres high, and jump from platforms with only a vine attached to their legs to break their fall.

As the men stand on top of the tower, contemplating the jump, they are spurred on by locals who sing, dance and stamp their feet below. When they finally dive from the tower into the ground, the atmosphere is electric.

The ceremony is said to ensure a good yam season but it is also a show of strength by the men. The ancient story tells of a wife climbing to the top of a tree during a fight with her husband. The husband chased her up and when she jumped to the ground he followed. Sadly, she had led him to his death as she had a vine around her legs to break her fall. The men jump every year between April and June to show the women that they will not be tricked again.

To find out more about Vanuatu or tours to the land diving festival contact your local travel agent or visit www.vanuatu.travel