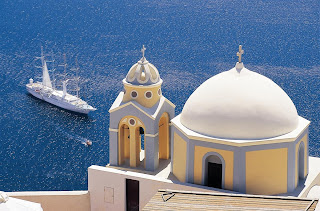 Cruise on the world's most romantic cruise line in 2010

Windstar has launched an Early Bird Sale offering major discounts on four Mediterranean cruises in 2010. Savings of up to $2,375 are available on 7-night cruises onboard the luxury motor sailing yacht, Wind Star on bookings made by 28 February 2010.  In addition to discounted fares, cruise lovers will also receive a US$100 onboard credit per person, plus a gratuity package valued at US$84 if they pay in full six months in advance.

Windstar Cruises was named the 'Most Romantic Cruise Line' for the fifth consecutive year in 2009 by readers of Porthole Cruise Magazine and now is the time to discover why. The intimate 148 passenger Wind Star is distinctive with her six triangular sails.  In addition to stylish staterooms, guests can enjoy a pampering treatment in the Windspa, take a dive off the water sports platform and dabble at the casino.

The four Mediterranean itineraries include:

Early bird fares start at AU$2,543 per person, twin share – a savings of $2,375 – for the 3 July 2010 cruise, with an alternative sailing date also available on 17 July 2010 for the reverse journey.  Sailing out of Piraeus (Athens), the cruise includes the Greek ports of Milos, Rethymnon (Crete) and Gythion followed by Messina (Sicily), Capri and Rome in Italy.

Cruising through the stunning Greek Islands, Windstar's Athens to Istanbul cruise promises plenty of glamour and fun. Guests can save $2,000 off the cruise fare, with early bird fares starting at AU$3,030 per person, twin share for a 7-day cruise on 4 September 2010. Alternative sailing dates are available from May through to October including the return itinerary from Istanbul to Athens.  Ports of call include Mykonos, Santorini, Rhodes and the Turkish ports of Bodrum, Kusadasi.

Amalfi and Sorrento are just some of the highlights on this return itinerary out of Rome on 23 October 2010. Early bird fares start at AU$2,549 per person, twin share – a saving of $1,188. The full itinerary includes Rome, Ischia, Sorrento, Amalfi, Cagliari (Sardinia), Port Cervo and Porto-Vecchio (Corsica).

Sail from Spain to Portugal on 6 November 2010 from AU$2,549 per person, twin share, with a $1,188 saving for bookings by 28 February 2010. The itinerary takes you from bustling Barcelona to the beach at Palma de Mallorca and onto the Andalusian cities of Almería, Málaga and Cádiz before sailing to Portimão on Portugal's Algarve coast and finally Lisbon. You will feel a million miles from home as you sail past rugged coastline and are swept up in lively culture.

To make a booking, please contact Travel the World on 1300 766 566 or visit www.traveltheworld.com.au.